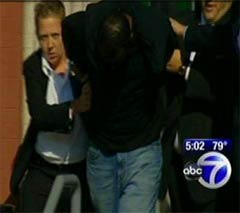 After being chocked into unconsciousness and robbed, we can't blame 85-year-old Lillian France for being pissed at the guy who attacked her. Cornelius Abson, who was caught on tape preying upon France in a Crown Heights elevator and arrested yesterday, confessed to police and apologized to France in a written letter, blaming it on his crack addiction. But France said, "How can he be sorry when I was the, I understand, the 12th victim?"

Police Commissioner Ray Kelly said that Abson was believed to be behind 11 other attacks, all but one of the victims were woman, and all victims were over the age of 55. Kelly said Abson "was preying on a universe of elderly people" and credited the surveillance video with “helped in marshalling feelings in the public domain," as the NYPD received a number of tips about the crime. But it turned out a veteran detective who had arrested Abson in 2002 for a very similar crime was struck by the MO and how the attacker's body shape seemed familiar. Detective Matthew Walker, who saw the video on the news at home, told the detective on this case, "I believe I know who committed this crime." (Abson had served five years for the 2002 robbery.)

Later on, the NY Times reports that Abson's parole officer identified him from the video and police found sunglasses and iPod earphones (the attacker in the video wore them) in his apartment. A crowd taunted Abson outside the 77th Precinct; the Daily News reports people yelled "Coward!" and "Where's your cane?" referring to France's cane, which Abson stole from the elevator but later dropped outside the building.

#Crown Heights
#elder attack
#elderly attack
#Lillian France
#robbery
Do you know the scoop? Comment below or Send us a Tip