Granny-Attacking Mugger to Get Psych Exam 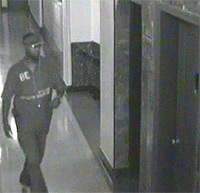 Cornelius Abson, who admitted to choking and robbing an 85-year-old woman as well as robbing other victims, appeared in court last Friday. However, his arraignment was postponed because his lawyer requested a psychological exam.

Lawyer Eric Bannister said, "It's my belief that my client is suffering serious mental health issues," and noted the bruises and bump on his client's head, "I believe my client has a legitimate fear for his safety." Abson, who claimed his crack addiction drove him to these attacks on the elderly, was moved to protective custody. Prosecutors, though, asked for a $1 million bail to be set; the Daily News reports ADA David Kleftzick told the judge of Abson's apparent "pattern of choking elderly women and taking their property." The suspect is currently being held without bail.

The News also has a list of Abson's apparent crime spree since being paroled in May--12 attacks between June 27 and his August 14 attack on Lillian France. Abson was charged with the August 14 attack and a July 11 attack on a 67-year-old man who was checking his mail (he took $200, a bank card and cell phone), and will be put in line-ups in up to 10 other cases.