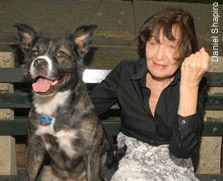 There was a great story in the Post about a trio who managed to stop two teen muggers on Wednesday. And there was an equally great photo of two-thirds of the crimestoppers: Jan Garten and pit-bull mix Gee.

On Wednesday afternoon, 84-year-old Garten was walking on Central Park West near 89th Street when she realized she was being followed by two young teens.

"I noticed an African-American kid, about 14, walking behind me, holding a big black workman's boot over my head," Garten said. "His skinny white friend was walking next to me with a red pen knife in his hands."

The two thugs yelled out, "Give us your money."

But the cool Garten said she wasn't having any of it.

"I didn't even turn my head," she said. "I said in a pleasant tone of voice, "Fellas, you gotta be kidding."

However, the teens kept walking next to her and were pushing her, until Stan Schnier and his dog Gee appeared. Schnier says Gee was "pulling me and was barking like crazy," so they chased the pair. They caught up with one, 14-year-old Alexander G., who cried, "Please, please, don't arrest me. It was just a school project." He was charged as a juvenile delinquent and apparently had tried to mug another woman the same day.

Schnier said, "Everybody was saying what a great dog, go buy her a pork chop. I said, 'Why take it out on the pig?' So I gave her some vegetarian sausages."

#central park
#central park west
#money
#News: NYC
#ny post
#On Wednesday
#Park West
#So I
#Wednesday
Do you know the scoop? Comment below or Send us a Tip
A new Gothamist is coming! We’ve moved comments over to our beta site. Click here to join the conversation and get a preview of our new website.