Five and a half months after the police arrested a man who told them "I did a bad thing. I killed a kid in New York," a Manhattan grand jury indicted him for the 1979 disappearance and murder of six-year-old Etan Patz. Pedro Hernandez was indicted on charges of second-degree murder and first-degree kidnapping.

While there was enough evidence for the grand jury to indict, the Manhattan DA's office faces challenges with prosecuting the case, because Etan's body has never been found and there does not seem to be any physical evidence linking Hernandez to the crime. The NY Times reports, "It is not clear whether the investigations in the months since Mr. Hernandez’s arrest have yielded evidence to corroborate his confession, which is typically needed to win a conviction. But law enforcement officials have maintained that the videotaped confession itself is strong and buttressed by confessions Mr. Hernandez made to others years ago. If the grand jury indicts Mr. Hernandez, the trial would be challenging. [His lawyer Harvey] Fishbein has said that Mr. Hernandez has a long history of mental illness that includes diagnoses of schizophrenia and bipolar disorder, with visual and auditory hallucinations."

Etan's May 25th,1979 disappearance occurred on his walk to the school bus—for the first time on his own—from his parents' loft at 113 Prince Street to the stop on West Broadway just two blocks away. The disappearance rocked the city and then the country, as Stanley and Julie Patz's unrelenting efforts to find their son galvanized the neighborhood and helped spur a nationwide movement to find missing children (Etan's photograph was the first on a milk carton). The Patzes also never moved from their apartment and changed their phone number, in hopes Etan would return. 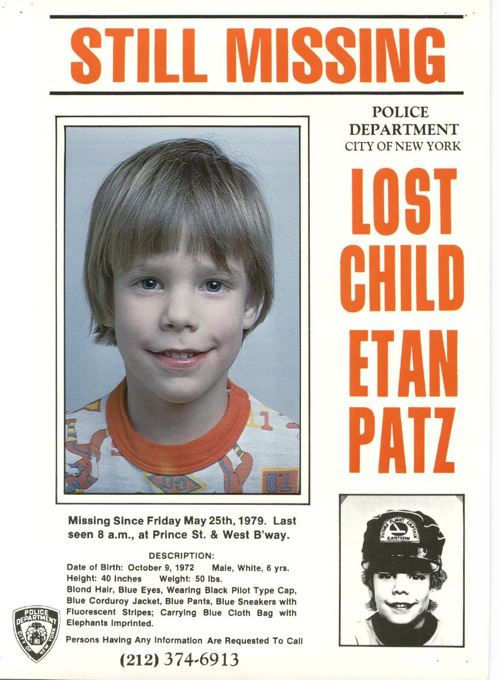 His body was never found, complicating efforts to charge the man who many believed was the prime suspect, Jose Ramos, a "drifter" who dated one of Etan's babysitters and who was arrested while allegedly trying to sexually assault some young blond boys. Ramos, who served a sentence for molesting young boys, was found responsible for Etan's death in 2004 in a civil lawsuit, but maintained he never killed the child.

In April, the FBI and NYPD examined the basement of a former area handyman, Othniel Miller. The FBI had re-interviewed Miller, after his ex-wife claimed he raped a young niece. During the interview, Miller, a stroke victim, allegedly "grew aroused" while shown a book of photos of young children and made the remark “What if the body was moved?" when asked where Etan's body was. Miller's family has insisted he is innocent and emphasized how the elderly man was cooperating with the investigation.

Hernandez had worked in a bodega near the bus stop at the time of Etan's disappearance. Fishbein told NBC New York, "The statements alleged by the people are not supported by any evidence whatsoever despite extraordinary investigative efforts by the police, back then and now."

Erin Duggan, the Communications Director for the Manhattan DA's office, said in a statement, “This indictment is the outcome of a lengthy and deliberative process, involving months of factual investigation and legal analysis. We believe the evidence that Mr. Hernandez killed Etan Patz to be credible and persuasive, and that his statements are not the product of any mental illness. The grand jury has found sufficient evidence to charge the defendant and this is a case that we believe should be presented to a jury at trial.”

#cold case
#disappearance
#etan patz
#harvey fishbein
#indictment
#pedro hernandez
Do you know the scoop? Comment below or Send us a Tip