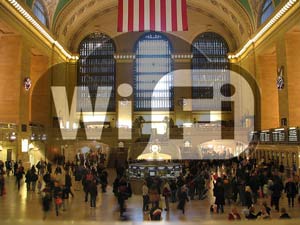 Grand Central Terminal will now feature its own Wi-Fi Internet access to those waiting in the Station Masters Office, one of the few places one is still allowed to sit down at the terminal without being told to get up and move along. The new wireless service will allow as many as 60 users online at a time and should prove an invaluable amenity for commuters to check or send off emails before and after getting off trains. The Station Masters Office is restricted to ticket-holding passengers.

If one has never been before, the Station Masters Office is located in the western corridor off the Main Hall, near the New York Transit Museum Annex. It is now home to many of the long benches that once filled Vanderbilt Hall and features three wall mural painted by Roberto Juarez.

Of course, Wi-Fi at GCT could be terrible news for those who are claiming a physical allergy to the modern convenience. As one man told ABC News,

"If I walk into a room or building that has Wi-Fi, my most immediate sign is that the front of my right thigh goes numb," said Arthur Firstenberg, 57, of Santa Fe, N.M. "If I don't leave, I'll get short of breath, chest pains and the numbness will spread."

That does not sound good. Maybe a cure will be discovered someday, so as to avoid terrifying incidences of mass paralysis during rush hour.