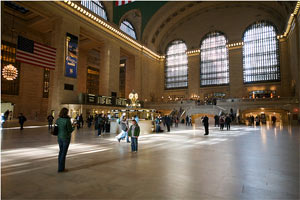 A man who concealed a video camera in a shopping bag to film women as they got onto an escalator at the Grand Central subway station was arested for unlawful surveillance.

The NY Sun reports that 21-year-old Jamarl Chambers would follow women up an escalator from the Lexington Avenue line. "The officers noticed Mr. Chambers ride up and down the escalator twice behind the women, each time placing the bag between their legs, before police confronted him at about 8 a.m. and saw the video camera."

Chambers has no prior arrest history and was sentenced to 10 days of community service. So far, the Sun says there have been 66 sexual abuse and/or public lewdness arrests this year (there were 264 last year). And upskirting cameras have been found in subway grates and have been the subject of Ethicist columns.

Photograph of Grand Central Terminal by mrgeneko on Flickr