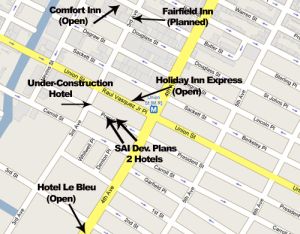 Brownstoner has done the math and concluded that there are a ridiculous number of hotels going up near Brooklyn’s lovely Gowanus Canal. The latest new development will be a nine story Fairfield Inn on Third Avenue between Douglass and Butler streets; construction will begin once existing buildings are torn down. So that makes a future grand total of 7 hotels in the Gowanus neighborhood; three already built and four more on the way.

With a Gowanus Esplanade and park (possibly) on the horizon, the neighborhood will certainly look radically different in the coming years, but how attractive will it be to tourists, even if the Nets’ stadium gets built and the canal is opened for flume rides?

Some Brownstoner readers speculate that the developers are building them as hotels now, but the minute the area is rezoned for residential development, they’ll convert the properties to condos.