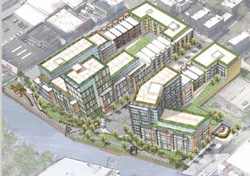 Though most of the neighborhood around the Gowanus Canal has not yet been rezoned for residential construction, one development company has just won approval for a big condo project with buildings up to 12 stories high and a public park along the canal. Blogger Pardon Me For Asking sat through a "long and drawn out" Landmark/Land Use committee meeting last night (so we didn't have to). She calls the near-unanimous vote "a sad outcome for the community":

Let me just say that no amount of testimony from concerned residents at last month's meeting, no concerns about pathogens in the waters of the canal, nor warnings that the land is in a flood zone were able to sway a majority of our board members from voting yes for Toll's spot rezoning.

And her poking around through public records revealed that Toll Brothers, the developer, has spent more than $365,000 to lobby for the project. All perfectly legal, but "finding out that it happens right here on such a local level is disturbing in many ways." Pardon us for asking, but does she know what happens to nosy bloggers?

Of course, the development is far from fait accompli; Toll Brothers must now submit to a lengthy land use approval process, then woo the entire Community Board. As Curbed pithily notes, the developer also faces the daunting task of securing investors willing "to lend megabucks for luxe condos on a canal that is literally an open sewer every time it rains." And one that's going to stink a lot more over the next couple years while the flushing tunnel is shut down as part of a $300 million cleanup of the toxic canal.