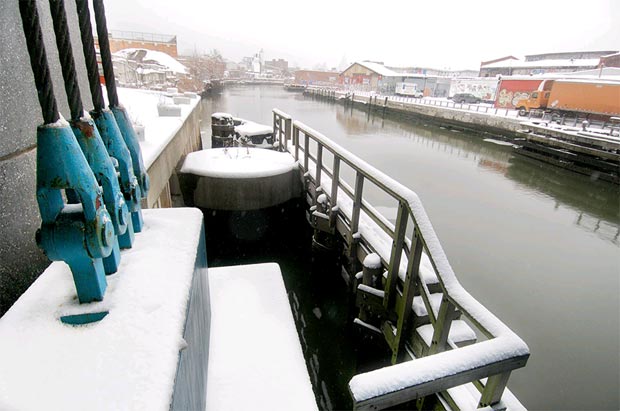 Documenting the city in the snow apparently has its limits. Gowanus Lounge noticed this photograph of the Gowanus Canal, taken yesterday, by photoblogger Joe Holmes. Holmes wrote on his Flickr page it was "taken seconds before I was told that photography is prohibited on the 9th Street bridge because of 9-11 concerns." Oh, man, that should be a problem for the Toll Bros. marketing department. And what if there's another whale or seal spotted?

Photographers and videographers, whether amateur or professional (but not carrying an NYPD press pass), have long been battling various agencies over the right to photograph parts of the city. Whether it's the MTA trying to crack down on photographs of the subway system or the Mayor's Office of Theater, Film and Broadcasting trying require permits and liability insurance for small groups, people have protested (noting civil liberties concerns) and the agencies have largely backed down (though the NYPD still arrests and MTA police officers still harass).

Oregon lawyer Bert Krages, who has spoken on NPR about the issue, drafted a "Photographer's Bill of Rights" (here's a PDF you can print out) which describes your rights as a photographer if you're stopped. Regarding his brush, Holmes added, "Those crafty terrorists -- blow up the 9th St bridge, and they'll bring this country to its knees." You can see more of his photographs at joe's nyc.