Governors Island Designs Not Quite Ambitious? 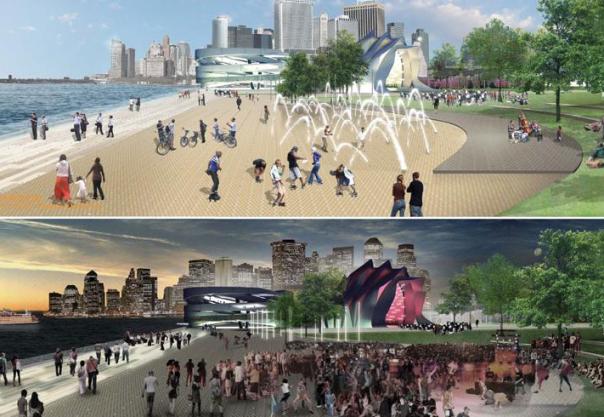 The Governors Island Preservation and Education Corporation is having a public meeting tonight to share the five designs for the island so far. The designers will be presenting and the public can offer feedback. The meeting is at 6:30PM at FIT (Reeves Great Hall, 28th Street and 7th Avenue), and you can see the designs here and wonder if you agree with what the NY Times' architecture critic Nicolai Ouroussoff thought about them, as he offered his opinion in today's paper.

Ourousoff calls the designs thoughtful, but laments that they lack the "sweeping ambition such a unique parcel of undeveloped public land in New York City should inspire." He compares the project to the gold standard:

"It has been nearly 150 years since Calvert Vaux and Frederick Law Olmsted laid out their plan for Central Park, the democratic utopia that is among 19th-century America’s greatest achievements. The plan was as notable for its audacity as for its aesthetic beauty. By comparison, all of these designs seem strangely subdued. This reflects not only budget restrictions, but also a climate of thinking small. How much more inspired would the designs have been if plans for the entire island, including its architectural components, had been requested, and if the teams were confident that there was money to carry them out?

Strolling across the barren loveliness of the island today, you long for a grander breadth of vision, for someone to step into Olmsted’s shoes."

Ouch. It'll be interesting to hear what goes on at the meeting - no doubt this article will come up. As we pointed out last week, it's possible that none of these designs will be built; instead, conceptual design processes like these are "an attempt to deploy big design to inspire big public zeal and the confidence of big developers/sponsors."

And here's a summary of Ouroussoff's thoughts on the different designs:

- Hargreaves Associates and Michael Maltzan Architecture: A "cunning attempt to engage the broader context of the city" with "pedestrian promenade unfurls along the island’s edge" and buildings that would "envelop the island in a necklace of geometric forms visible from surrounding boroughs."
- Field Operations and Wilkinson Eyre: "a fairy tale setting" with its "series of rolling, scallop-shaped earthworks," "dense forest of oak and maple trees," and fog from misters
- REX/MDP: "conceptually less refined," "grid, which in its current form seems somewhat simplistic, cleaves too closely to Manhattan"
- WRT and Urban Strategies: "sadly conventional" with "wetlands, wooded areas, sculpture parks and farmland" and a hill that "blocks out one of the most gratifying views of the harbor"
- Diller Scofidio & Renfro, Rogers Marvel Architects, West 8, Quennell Rothschild & Partners, and SMWM: "most thoughtful," with a "mountainous landscape...framing a view toward the Statue of Liberty and dividing the site into two zones, with a great lawn to the north and a fresh-water marsh to the south" with the mountainous forms concealing "a series of buildings — maritime gallery, climate research center, greenhouse — that inject the site with a dose of urban energy"