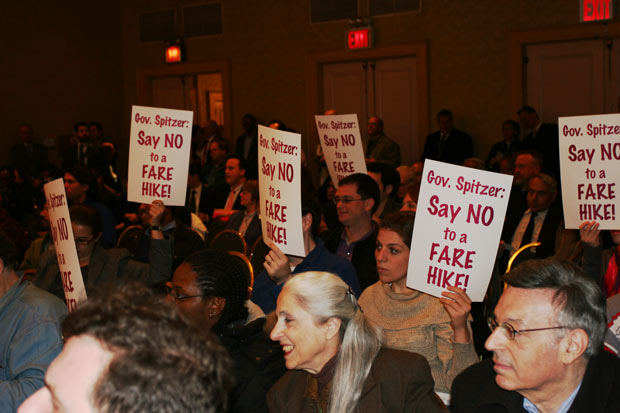 Dunh dunh DUNH! Governor Spitzer has announced that he is asking the MTA to hold off raising subway and bus fares! Spitzer, who has been smarting from widely hated policy proposals and low approval ratings, made a pre-Thanksgiving bid to show he's listening to his public and said, during a specially planned 9AM press conference, via CityRoom:

As the M.T.A. budget forecasts, their balance sheets yielded another $220 million. Based on the current economic climate that has so many New Yorkers feeling squeezed, it seemed only proper that this amount be returned to the riders. I am therefore calling on the M.T.A. to use these funds to reduce the proposed fare and toll increase. This reduction will ease the burden for the millions of New Yorkers who use the M.T.A.’s transportation network every day and will allow the M.T.A. to hold the base fare for subways and buses to $2.

Wow, it's only taken Spitzer - and the MTA - about four months (when a 2008 & 2010 fare hike was first announced) to figure out that MTA revenue would be able to stave off a fare hike for now. While Governor Spitzer says he's calling on the MTA to reduce the fare hike, he's actually the one with the power to help out the MTA with state funding - something the MTA has been lacking for many years.

So far, it's unclear if when a fare hike would be needed in the future, but it seems that governors like to schedule them earlier in their terms, rather than later - but our guess is that Spitzer is so battered, he wants a boost from relieved New Yorkers.

Update: The base subway and bus fare may stay at $2, but the cost for unlimited Metrocards may rise (the MTA needs to do some calculations - let's hope they are using the counting machine that reminded them of revenue surpluses). Bridge and tunnel tolls may still rise as well. In the mean time, let's look at where the additional $220 million came from:

Underspending - that's...interesting. MTA Executive Director and CEO Lee Sander said, "The MTA is grateful to Governor Spitzer for his commitment to funding public transit and our four-year financial plan. We are glad that revenues came in high enough to allow us to limit the fare increase and still address $6 billion in deficits over the next four years.”

And MTA Chairman Dale Hemmerdinger promised to discuss the matter at the December board meeting, “When I was confirmed I said I would listen to the public and review the numbers and I am thrilled that we are able to give something back. I believe this is a compromise that helps our customers without compromising our fiduciary responsibility, and I look forward to discussing it further with my fellow Board members.” Let's hope those board members attend that meeting.