Governor Spitzer Involved with Prostitution Ring;
Spitzer Has Not Resigned 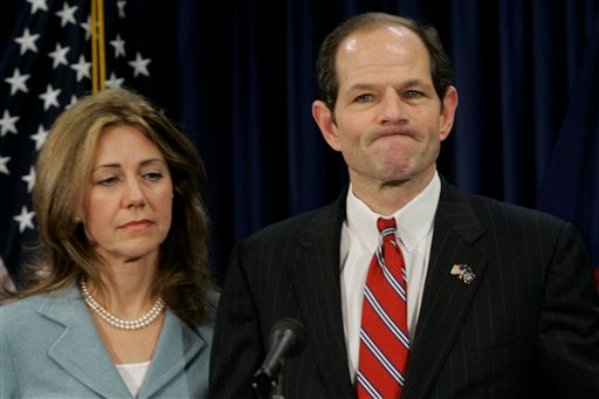 Photograph of Governor Spitzer, with his wife Silda Wall Spitzer, during his apology to his family and the citizens of New York by Mary Altaffer/AP

Governor Spitzer made a statement this afternoon referring to his apparent link to a prostitution ring." He had canceled his events and made this brief and cryptic statement:

Over the past nine years, eight as attorney general and one as governor, I have tried to uphold a vision of progressive politics that would rebuild New york and create opportunity for all.

We sought to bring real change to New York, and that will continue.

Today, I want to briefly address a private matter.

I do not believe that politics in the long run is about individuals. It is about ideas, the public good and doing what it best for the state of New York.

But I have disappointed and failed to live up to the standard I expected of myself. I must now dedicate some time to regain the trust of my family.

I will not be taking questions. Thank you very much. I will report back to you in short order.

Thank you very much.

You can listen to his statement here. And you can also watch it:

Is the reference to ideas, vs. individuals, a signal he isn't leaving office without a fight? Spitzer, whose first year in office has been rocky, is married to his Harvard Law School sweetheart Silda Wall Spitzer and has three daughters; Wall Spitzer was next to Spitzer during the speech, looking "weary."

Today, the Sun reported that "the U.S. attorney's office in Manhattan may have evidence that a public official hired a prostitute," in connection to the international prostitution ring broken up last week (the one with the diamond rating system and additional investment and art dealing services). The Sun noticed that "all three of the assistant U.S. attorneys assigned to the prosecution are part of the U.S. attorney's public corruption unit."

Spitzer was caught on federal wiretap arranging for a prostitute to meet him. From the Times:

The wiretap recording, made during an investigation of a prostitution ring called Emperors Club VIP, captured a man identified as Client 9 on a telephone call confirming plans to have a woman travel from New York to Washington, where he had reserved a room. The person briefed on the case identified Mr. Spitzer as Client 9.

The Emperors Club website had said, "As a person of immense financial and influential affluence, your privacy is sacred to all aspects of your life. As a private, international club specializing in catering to the needs of the worlds most financially and culturally elite, privacy and discretion are paramount objectives in everything we do." 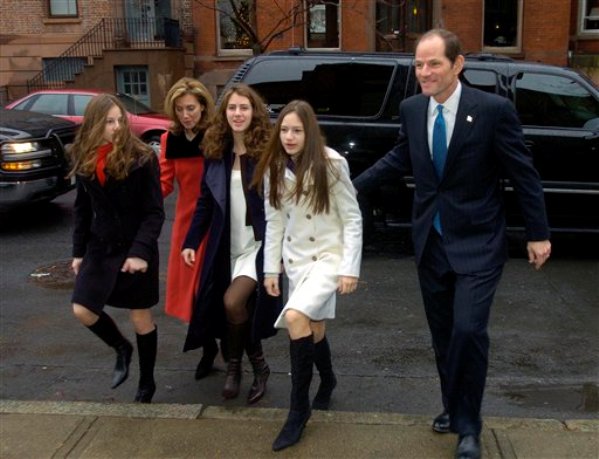 Photograph, taken in 2007, of Spitzer with, from left, daughter Jenna, wife Silda Wall Spitzer and daughters Elyssa and Sarabeth by Tim Roske/AP

The Daily News' Errol Louis, on WNYC, mentioned the Mann Act, which involves human trafficking and white slavery, because the prostitute seems to have traveled from NY to DC. WNYC's Andrea Bernstein doesn't think Spitzer can recover from this scandal, if it's true. And apparently the buzz at a fundraiser for Sheldon Silver this morning was that Spitzer would resign.

If Spitzer resigns, Lieutenant Governor David Paterson is next in line (there was some talk of him running for Senate if Hillary Clinton were elected President), and after that, it's the Senate Majority Leader (Joe Bruno) and then the Assembly Speaker (Sheldon Silver).

The NY Post's Fred Dicker said there were some rumblings about a high ranking public official being involved with the ring and told 1010WINS, "This is the biggest political story, if it's true, of modern New York history." Naturally, the Governor's website is down. And if you want some Photoshop fun, check this out.

#client 9
#Emperors Club
#Governor Spitzer
#hookergate
#prostitution
#scandal
Do you know the scoop? Comment below or Send us a Tip