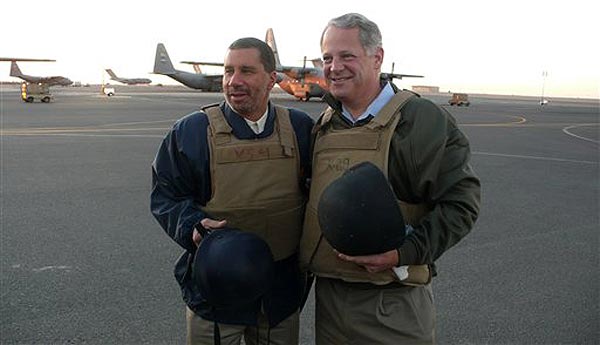 Governor David Paterson headed to Iraq for a surprise visit to deliver gifts and say thank you to the troops. The Daily News reports, "Paterson, joined by Reps. Anthony Weiner (D-Brooklyn,Queens) and Steve Israel (D-L.I.), arrived in Iraq with Yankees andMets baseball caps for the soldiers."

This was Paterson's first visit to Iraq. He said, "They treat the three of us as if we've done something extraordinary by coming over to visit them. The least we can do is come over and bring them some gifts and tell them how much the American people, in particular New Yorkers, arebehind them."

The NY Times reports that Paterson said he would support President-elect Obama's decisions on Iraq, "I trust that they are making the right decision...And I’m sure that part of the decision is that you would never want anyone that you may be in conflict with to know exactly when you’re leaving.” And Paterson also referred a decision he must make, "Five of six [soldiers] asked me who the new senator is.”

Speaking of, the Post suggests that this trip gives Rep. Israel some time to discuss his desire for the soon-to-be vacated Senate seat—and says Rep. Weiner may also talk to Paterson about the gig.

#Clinton replacement
#governor paterson
#iraq
#senate
#steve israel
Do you know the scoop? Comment below or Send us a Tip