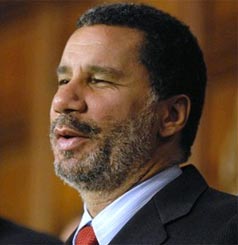 Governor David Paterson frequently uses humor to disarm his audiences (we were disarmed in September and he disarmed Stephen Colbert's crowd, too) but he made a splash with an important group of people last night: Members of the Gridiron Club, made up of Washington bureau chiefs of newspapers and networks.

The NY Times says that at the club's winter dinner, "politicians often try their hand at humor. Paterson came prepared, riffing on former governor Eliot Spitzer (the spring Gridiron dinner was that last public event Spitzer attended!), being an accidental governor discussing who he might and his dreams. Paterson referred to the hubbub over who will replace Senator Hillary Clinton and checked his cellphone for messages--and played voicemails from Senator Chuck Schumer, Mayor Bloomberg and Clinton herself. From Schumer: "I have one criteria above all. I would like a devout evangelical. That way, there will be no competition for Sunday press conferences.”; Bloomberg: "Listen, about that open Senate seat, is that term limited in any way? Just wondering.”; Clinton: Schumer "figures, Why bother? Why does New York need two senators, anyhow?”

You can listen to his speech--and the rousing applause he gets--here. The Daily Politics notes Paterson ended on this note: "So, I hope that President Obama will be able to create jobs through this stimulus package and that is how we will start on the road - Republicans and Democrats - on the road to recovery. And it is important because that is the last part of the plan - I want to be President. I want to follow President Obama. Now, that might seem strange to you that that would even be possible but you know that old saying - Once you go black, you don’t go back." Hey, Governor Paterson's office--put this up on Youtube, please!