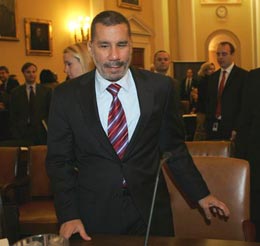 After spelling out the dire news that NY State's budget deficit will balloon to $47 billion by 2012 yesterday, Governor Paterson is now in Washington D.C., testifying before the House Ways and Means Committee, to request for a federal Empire State bailout.

Paterson had said yesterday, "Because New York is really the epicenter of the national crisis of finance, we're going to need federal assistance." Not to mention, "We will have no choice but to take bold and aggressive action to reduce state spending." You can see the grim details herehails Paterson's courage, and blasts the four (Republican) State Senators who "issued a ridiculous press release to whine about a minor cost-saving effort in Medicaid," when the state is facing such dire news.

The Governor has also emphasized that states should be involved in oversight of the bailout plan, noting, "Given the importance that financial institutions have to state economies, and the devastating impact that foreclosures are having on communities, state representation in the overview process would provide a unique perspective and valuable input.” A press release also notes that Paterson has said the U.S. was in a recession "as early as March 20."