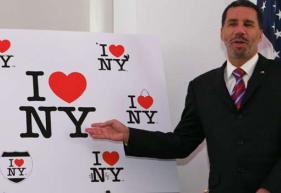 Governor David Paterson never ceases to surprise us. It turns out his two-bedroom apartment in Harlem is rent-stabilized, so he and his wife only pay $1,250/month for their home.

Paterson and his wife Michelle, who made $270,000 last year, live in the Lenox Terrace apartment complex, where the market rate for a two-bedroom go for $2,600. When asked by the Sun, Paterson said the rent was appropriate, given the city's rent regulations. "It is within the spirit of the law."

However, the Conservative Party's chairman Michael Long told the Sun, "Why should a high official like the governor of the state of the New York live in a government-subsidized apartment?" (The Patersons own a home upstate, near Albany, and could reside in the Governor's Mansion.) And the Rent Stabilization Association's Frank Ricci said, "People who make over $100,000 have plenty of choices where to live."

Discussions to raise rent stabilized rents are currently underway. They will undoubtedly be higher than what tenants want and lower than what landlords want.

#governor paterson
#rent guidelines board
#rent stabilization
Do you know the scoop? Comment below or Send us a Tip
A new Gothamist is coming! We’ve moved comments over to our beta site. Click here to join the conversation and get a preview of our new website.