The mass transit miracle a hundred years in the making has come true: The Second Avenue Subway was ready by December 2016! The MTA finished the job so Governor Andrew Cuomo could plan a ceremonial first ride last night for a few hundred people he invited for a New Year's Eve party at the 72nd Street station.

The governor has been making the most of the $4.5 billion expansion of the subway system, by promising the public the line would be complete on time and hosting a series of open houses with the public. The public will get to ride the subway today at noon.

So excited to be taking the inaugural trip on the #2ndAveSubway this New Year's! 🎉 #HNY2017 pic.twitter.com/xxsPnNCHVt

The invite to the first Second Avenue subway ride was a hot coveted score; the Daily News reported, "One guest who will be in attendance has been fielding requests for extra tickets from the city’s politicos. 'They’re insecure because they’re afraid to show up to something they’re not invited to and not get in,' the attendee said." However, some organizations mentioned by the Governor's office as being involved in the party did not have representatives attend.

In remarks at the party last night, Cuomo thanked the MTA, including Chairman Thomas Prendergast and Capital Construction President Michael Horodniceanu, for "stepp[ing] up to get this project done on time" and making it "extraordinary." He also acknowledged "all the people who worked on this before - we had Joe Lhota who was here, Mayor Dinkins who was here, Mayor Bill de Blasio who made a major commitment to the MTA. All the contractors who were here, I don’t want to start to name them, but they really, really made a superhuman effort to get this done on time and let’s give them all a round of applause."

He also took the time to marvel at the project and explain why he planned a party:

So, what you had was all that volume then going to Lexington Avenue and that’s what made the 4, 5, 6 line on Lexington Avenue the busiest lines on the planet and this Second Avenue Subway line is now going to give the East Side access, it will reduce the congestion on 4, 5, 6 - it’s been a long time coming, but it is not just - this is not your grandfather’s subway station.

I said to my family, I said “You know how about this for an idea. We have a New Year’s Eve party in the new subway station?” And they gave me that look, like you know, “There’s crazy Dad again.” But, I said this is unlike any subway station you’ve ever seen. You look at this mezzanine level, which subway stations normally don’t have, its open, it’s airy. You look at the public art that is in all these stations, it is amazing. So, let’s give them a round of applause.

The party was full of guests dressed to the nines, who all scrambled to get on for the first ride. There was also a lot of security; Homeland Security Secretary Jeh Johnson was there, so there was Secret Service in addition to NYPD and MTA police. 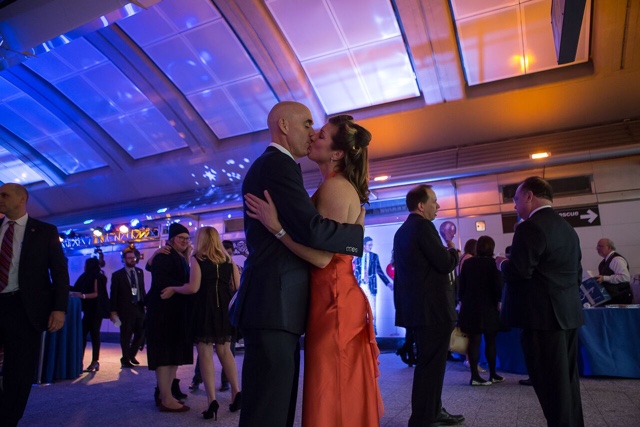 #governor cuomo
#sandra lee
#second avenue subway
#subway
Do you know the scoop? Comment below or Send us a Tip