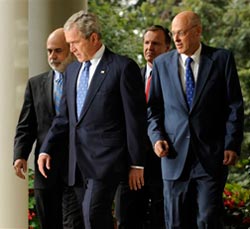 The Bush administration's $700 billion request to bail out bad mortgages was formally sent to Congress today. From the Washington Post:

The package, the most sweeping government intervention in the markets since the Great Depression, was $200 billion higher than lawmakers had been told yesterday to expect. It also does not include the $200 billion that officials said earlier this month the government will spend on the rescue of Fannie Mae and Freddie Mac.

To accommodate the spending, the package also would also raise the federal debt limit to $11.3 trillion from the current $10.6 trillion. The debt now stands at $9.6 trillion.

President Bush told reporters today, "It is a big package because it's a big problem. The risk of doing nothing far outweighs the risk of the package." Further, he tried to explain why he did it, being the MBA President and all: "I'm sure there are some of my friends out there that are saying, 'I thought this guy was a market guy, what happened to him?' My first instinct was to let the market work, until I realized, while being briefed by the experts, how significant this problem became.''

The NY Times has an editorial, saying, "Taxpayers have every right to be alarmed and angry" about this fifth bailout, but it's "not necessarily a bad" plan. However: "Make no mistake, this crisis could have been avoided if regulators had enforced rules and officials had dared to question risky lending and other dubious practices."

For the give-me-a-goddamn-break file, the Wall Street Journal looks at how "New York's Wealthy Economize":

A nose job in a hospital with a private nurse in attendance had been something of a rite of passage for Joan Asher's children. But when her fourth and last child was ready for her own rhinoplasty recently, Ms. Asher asked her to postpone it.

The financial markets were simply more out of whack than her 16-year-old's proboscis.

"The other noses were more prominent," the stay-at-home mother from a tony New York City suburb in Westchester County told her 16-year-old daughter. She could get hers done when things settled down.

On the other side, the Daily News' Errol Louis has a column about regular people wondering where their bailouts are.