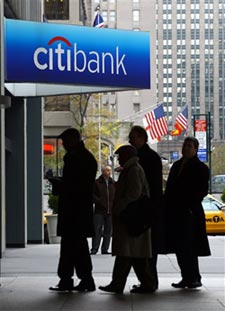 Update: Here's the government's bailout plan for Citigroup: The government will invest $20 billion directly into Citigroup while also backing $306 billion in loans and securities (the Times says the plan is "complex"). In return, Bloomberg News says the government gets "$27 billion of preferred shares paying an 8 percent dividend."

The NY Post notes, "Under the deal, the government will have the right to slash the huge pay packages and bonuses that Citi's executives had long enjoyed, and cap stockholder dividends at only 1 cent per share."

You can read the full statement from the Treasury, Federal Reserve and FDIC here, but here's a little excerpt:

With these transactions, the U.S. government is taking the actions necessary to strengthen the financial system and protect U.S. taxpayers and the U.S. economy.

We will continue to use all of our resources to preserve the strength of our banking institutions and promote the process of repair and recovery and to manage risks. The following principles guide our efforts:

- We will work to support a healthy resumption of credit flows to households and businesses.
- We will exercise prudent stewardship of taxpayer resources.
- We will carefully circumscribe the involvement of government in the financial sector.
- We will bolster the efforts of financial institutions to attract private capital.

Citi is still receiving the $25 billion from the Troubled Asset Relief Program.

Earlier:The federal government is "nearing approval of a radical plan to stabilize Citigroup on Sunday in which the government would soak up tens of billions of dollars in losses at the struggling bank," according to the NY Times. Last week, Citigroup stock fell 60% and worries swirled around its financial health. The company, which suffered a great deal with the subprime mortgage crisis, also announced it would eliminate over 50,000 jobs.

According to CNBC, the government's "main priority" would be to give Citigroup a $10-20 billion equity infusion, but it's "provisional and subject to change. The plan will probably be a multi-layered one, which means the government could backstop losses on Citigroup's troubled assets as well. In exchange, Citi may issue preferred stock to the government."

The Wall Street Journal adds, "Another possibility on the table was the creation of what is sometimes called a 'bad bank' -- an outside entity designed to hold some of a financial firm's worst assets. That structure would help Citigroup cleanse itself of billions of dollars in weak assets, these people said." Mellon Bank (now Bank of New York Mellon Corp.) was saved by using the "bad bank" structure.

#bailout
#business
#citigroup
#economy
#layoffs
#wall street
Do you know the scoop? Comment below or Send us a Tip