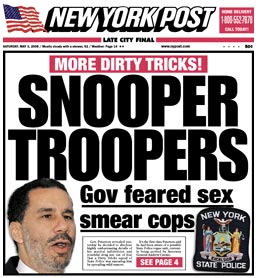 Governor David Paterson explained possible rumormongering by the state police was why he admitted his extramarital affairs and drug use shortly after taking office. Yes--Paterson was essentially afraid of the NY State Police!

When being interviewed on WFAN-AM and questioned about Spitzer administration's monitoring of State Senate Majority Leader Joe Bruno's aircraft activity, Paterson said, "I don’t want to go into too much detail, but I will say this: That was also on my mind when I made my own personal revelation...

"There was obviously an element in the police force — and it wasn’t Republican or Democrat — it was just out-of-control people who had power that were clearly monitoring a lot of the elected officials. And I was kind of afraid of leaks of inaccurate information about myself." So, besides the pre-emptive admissions of infidelity and youthful indiscretions, he asked Attorney General Andrew Cuomo to investigate the state police.

After the radio interview, Paterson gave a press conference and later told the NY Post, "I just thought it was unusual that over 10 legislators would approach a new governor asking him to take action on the situation, and the individuals were Republicans and Democrats from upstate and downstate."

A former State Police super, Wayne Bennett, told the Times he had "no knowledge of any situation that even remotely comes close to this kind of suggestion" but acknowledged it was possible "one or two or three people [acted] independently."