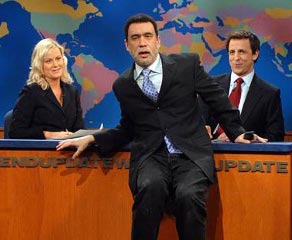 Though some people may have laughed at Saturday Night Live's depiction of Governor David Paterson—which did include Fred Armisen as Paterson stumbling around due to his blindness and saying "I'm a blind man who loves cocaine who was suddenly appointed governor of New York. My life is an actual plot from a Richard Pryor movie."—Paterson himself was not one of them.

The governor was more upset with how blind people were portrayed, telling the Daily News, "I can take a joke. But only 37% of disabled people are working and I'm afraid that that kind of third-grade humor certainly adds to this atmosphere... Let's just say I don't think it helped," and his office issued a statement slamming the show, too:

The governor engages in humor all the time, and he can certainly take a joke. However, this particular Saturday' Night Live' skit unfortunately chose to ridicule people with physical disabilities and imply that disabled people are incapable of having jobs with serious responsibilities. The governor is sure that Saturday' Night Live,' with all of its talent, can find a way to be funny without being offensive. Knowing the governor, he might even have some suggestions himself.

Well, obviously Paterson needs to appear on the next show!

Unfortunately, NBC was unable to find anyone available to comment about the skit. The Weekend Update segment featured two Paterson bits (videos after the jump): First had Paterson discussing what he was looking for in a Senate replacement for Hillary Clinton (and fumbling with a chart) and the second featured Paterson accidentally walking into the camera shot. 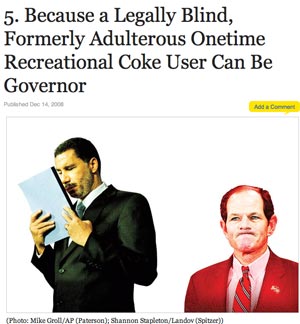 Chris Danielsen, spokesman for the National Federation of the Blind, worries potential employers won't take blind people seriously, "When you have a perception problem like we have, you take these things a little more seriously... Obviously, the governor of New York is blind, and he's doing the job. Whenever you have a portrayal that calls the basic capacity of [blind people] into question, that's a potential problem."

NY Magazine's Daily Intel was offended by the skit; coincidentally, the print edition of NY Magazine says reason #5 to love New York is "Because a Legally Blind, Formerly Adulterous Onetime Recreational Coke User Can Be Governor" with a photo of Paterson holding up papers really close to his face. [Reason #6 is "Because When We Flame Out, We Do So in Spectacular Fashion (though perhaps not as spectacular as some)"—cue Spitzer image]

Armisen also plays "Richie B." a deaf, politically incorrect comedian. And we remember how SNL used the "walking into the shot" device on Weekend Update with Crazy McCain Lady.

#blind
#fred armisen
#governor paterson
#nbc
#offensive
#saturday night live
#spoof
Do you know the scoop? Comment below or Send us a Tip