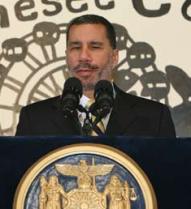 Governor David Paterson checked into Mount Sinai Medical Center in Manhattan for "migraine-like symptoms." According to the Governor's office, "He was evaluated and all preliminary tests were normal. He is now resting comfortably and will undergo further tests during the course of the day."

Paterson turns 54 today. The AP says his health has "been a concern in recent years"--he was hospitalized last July when he fainted and in April 2006 for chest pains--but test results have shown no signs of heart disease. It's unclear if Paterson's birthday party today will go on as planned.

The Governor was scheduled to speak at a commencement ceremony at Columbia University (he's class of 1977) but canceled the appearance--Attorney General Andrew Cuomo will be filling in. It would have been funnier if former governor Eliot Spitzer were the back-up.

Fun fact: The last time we recall a NY Governor being suddenly taken to a hospital was when Governor Pataki had to have an emergency appendectomy, which left him constipated.

Update: The source of Paterson's symptoms is glaucoma in his left eye and he will undergo a laser procedure. His office said, "The governor will remain conscious throughout the procedure, but in an abundance of caution, the Senate majority leader and the Assembly speaker were advised of this pursuant to standard protocol."

#david paterson
#governor paterson
#health
Do you know the scoop? Comment below or Send us a Tip