It wasn't until he was 16 minutes into his keynote speech at the Republican National Convention that New Jersey Governor Chris Christie mentioned the name of a certain someone who wants to win a presidential election in November. The long wind-up to Mitt Romney—who tried to woo Christie as his Vice President—was prefaced by a quarter hour of Christie this and Christie that, and several reporters say Romney looked extremely dissatisfied with Christie's self-aggrandizing speech. But did Mitt really expect Christie to reference him before the almighty Bruce Springsteen?

The Boss was invoked in the first several minutes of Christie's autobiographical speech, which began with the governor introducing himself to America as "the son of an Irish father and a Sicilian mother... They both lived hard lives. Dad grew up in poverty...Mom also came from nothing. She was raised by a single mother who took three buses to get to work every day... She spoke the truth - bluntly, directly and without much varnish. I am her son. I was her son as I listened to 'Darkness on the Edge of Town' with my high school friends on the Jersey Shore." 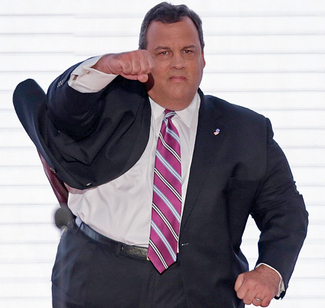 Christie carefully left out the part where he always fell asleep by the second verse and his friends had to tuck him into bed, but no matter. Intentionally or not, the speech drew a stark contrast between Christie's hardscrabble roots and Romney's elite upbringing, which might explain Romney's "death stare." Sources tell the NY Post that Christie declined to run as Romney's Vice President because he didn't think Romney could beat Obama. (Sources say Romney's camp also insisted Christie resign as governor in order to campaign, because otherwise campaign finance laws would have limited donations from Wall Street executives who do business in NJ.)

Christie's famously aggressive tone was kept mostly in check during the speech, which highlighted his, heh, soft side. But Christie did spray some contempt in Obama's direction, even if he didn't mention the President by name. "It takes leadership that you don’t get from reading a poll,” Christie told a rapturous audience. "You see, Mr. President - real leaders don’t follow polls. Real leaders change polls... Our leaders today have decided it is more important to be popular, to do what is easy and say ‘yes,’ rather than to say ‘no’ when ‘no’ is what’s required. It’s been easy for our leaders to say not us, and not now, in taking on the tough issues. And we’ve stood silently by, and let them get away with it."

But after planting the fertile seeds for a 2016 "President Christie" campaign, the governor finally got around to fluffing Mitt Romney, telling the party, "Tonight, we stand up for Mitt Romney as the next President of the United States. And, together, we stand up once again for American greatness." But should American voters fail to stand up for greatness in November, it's still going to be an uphill battle for Christie to the GOP nomination in four years. “My impression is that he’s part of the eastern elite,” Iowa delegate Ruth Long told the Daily News. Time to dial down the Springsteen and crank up the Nugent, Governor.

Visit NBCNews.com for breaking news, world news, and news about the economy