The New York State Democratic Committee is deploying a unique blend of peer pressure, paranoia, and intimidation to get out the vote next week.

"Who you vote for is your secret," the campaign mailer states, its cigarette ash falling gently to the carpet. "But whether or not you vote is public record."

"Many organizations monitor turnout in your neighborhood and are disappointed by the inconsistent voting of many of your neighbors," the letter continues, as your eyes dart out the window to a bald man at a balcony across the street, binoculars resting on his paunch, mustache shimmering across his blank face.

An Upper West Side resident got this

"I'm a regular voter and loyal Democrat, so I was taken aback by this creepy and almost threatening letter from the NY State Democratic Committee that I got in the mail today," one disturbed reader in Downtown Brooklyn told us.

Another who received the mailer on the Upper West Side added, "I can't believe they think this will actually make anyone more likely to vote, and it certainly doesn't make me want to vote for any of the Democratic establishment candidates. I might end up writing in Teachout/Wu."

We asked a rep from the NYSDC about the letter, but he has not responded. We have not tried calling the pay phone behind the butcher shop that rings three times, pauses, and rings once more before disconnecting.

"We will be reviewing the Kings County official voting records after the upcoming election to determine whether you joined your neighbors who voted in 2014," the letter concludes, as a group of men in khaki dusters help each other up into the bed of a nondescript cargo truck.

"If you do not vote this year, we will be interested to hear why not." 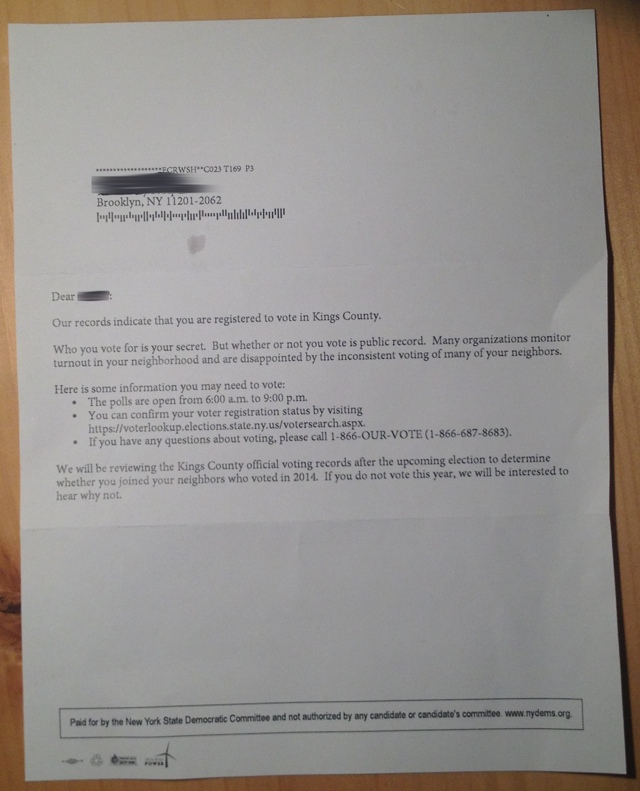 The full letter, from a Brooklyn resident

#Democrats
#ny state
Do you know the scoop? Comment below or Send us a Tip