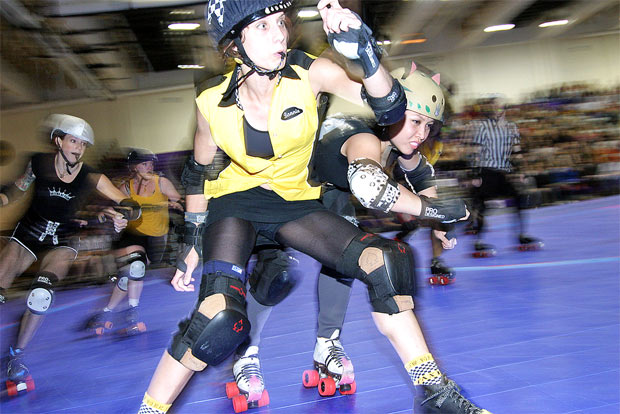 Last night at City College, it was Gotham Girls Roller Derby fever. The two-time defending champions the Queens of Pain faced off against the Bronx Gridlock to decide who would reign supreme for the 2007 season and take home a pretty sweet trophy.

Raymond Haddad was on the scene for the championship match and took some amazing pictures. He reports, "The Queens of Pain made a ferocious comeback [apparently 31 unanswered points', led by captain Suzy Hotrod, rallying in the final minutes but unable to catch the Bronx Gridlock, who finished their dominating undefeated season winning the 2007 Championship 95–90." And Bronx Gridlock team captain Ginger Snap (Nattily Blair) proclaimed, "Damn, my Bronx girls are hot!"

Tryouts for the 2008 season are tomorrow night, but it's full. There is, however, a waiting list. We've previously interviewed Li'l Red Terror of the Brooklyn Bombshells; she explained, "Like any sport, we condition our bodies and train as skaters. To be an good skater you have to be fast on your skates, have great endurance, quick witted for the strategy, and solid as an oak."

Photograph by Raymond Haddad; check out the full set here