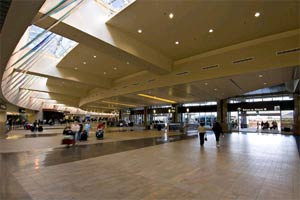 Manhattan resident Carol Ann Gotbaum, who is married to the stepson of Public Advocate Betsy Gotbaum, died in a Phoenix airport holding cell while in police custody. Phoenix authorities believe she may have died while trying to get out of her handcuffs.

Carol Ann Gotbaum, 45, was trying to board a flight to Tucson at the Phoenix Sky Harbor Airport, but arrived too late and was booked on another flight. A US Airways spokesman, Derek Hanna, said that "she became extremely irate, apparently running up and down the gate area." She also allegedly shouted at the gate attendant, so US Airways called security. From the Post:

Gotbaum ran into the responding officers after going back through the security checkpoint toward the main terminal, said Sgt. Andy Hill, a police spokesman.

"The officers were not able to calm Ms. Gotbaum and eventually arrested her for disorderly conduct."

Gotbaum resisted, and was "continually screaming" after being put into a holding cell, Hill said.

Officers checked on her every 15 minutes, but some five to 10 minutes after one check-in, he said, she had gone silent.

They then found that she wasn't breathing and attempts to revive her failed.

"It appeared as though Ms. Gotbaum had possibly tried to manipulate the handcuffs from behind her to the front, got tangled up in the process, and they ended up around her neck area," Hill said.

Hill added, "She was very agitated and irate and angry. These are the things that led to the disorderly conduct arrest." The Daily News reports that authorities say they did not use pepper spray or a Taser on Gotbaum. The Maricopa County medical examiner will be determining the cause of death.

Gotbaum married Noah Gotbaum twelve years ago (announcement here). She lived on West 95th Street, where Noah Gotbaum told a Post reporter, "I don't want to talk about it. It's rude." Betsy Gotbaum, who is second in the line of succession for the job of Mayor, told the Post, "The family is in great grieving and stress. We have nothing to say. We hope that The Post and every other newspaper will respect our privacy." And she said to the Daily News, "We are very concerned about what happened at Phoenix airport. It's under investigation and we are following that investigation. She has three very small children. It's a very delicate matter."