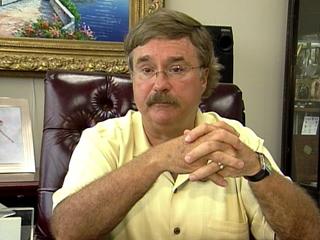 The lawyer for the family of Carol Anne Gotbaum, the New York resident who died while in police custody at the Phoenix airport last Friday, continued to blast the Maricopa County medical examiner's office as well as question police tactics. Gotbaum, who was traveling to Tucson for alcohol rehabilitation, had become agitated when she missed the flight. Since they were unable to calm her, police arrested her and left her handcuffed to a bench in a holding cell. She died during, apparently from strangling herself on her shackles, perhaps in an attempt to get out. Lawyer Michael Manning (pictured) said the Gotbaum family "has no quarrel whatsoever with police intervening. It's the way they intervened. You don't tackle, shackle and cuff (without first talking to her)."

Gotbaum lived on the Upper West Side with her husband and three children; she was also the daughter-in-law of union head Victor Gotbaum and stepdaughter-in-law of NYC's Public Advocate Betsy Gotbaum. Because of the NYC - and national - media interest in her death, the Phoenix police department has been less forthcoming with information. The Arizona Republic reports, "Investigators have refused to disclose basic information that would normally be public record, including the names of the officers and witnesses, as well as the police report." But the police have said that Gotbaum hurled her PDA, nearly hitting another person, while she was upset about missing her flight. Some more details, via the Republic:

- Officers at Terminal 4 left Gotbaum shackled and alone in the holding room because they did not believe she was a danger to herself or to others, the standard used to determine whether a detainee should be under constant watch.
- Police made desperate efforts to revive the woman, using lifesaving techniques and a defibrillator. At one point, police said, "The officers began mouth-to-mouth resuscitation and CPR. . . . Ms. Gotbaum vomited into one officer's mouth. The officer spit up himself but continued to do mouth-to-mouth resuscitation."
- Officers were unaware that the woman suffered from alcoholism or was seeking treatment. They knew only that, after missing her connecting flight, Gotbaum became agitated, screamed and resisted as she was arrested for misdemeanor disorderly conduct.

"Officers did everything they could to save the life of a citizen," [police spokesman Sergeant Andy] Hill wrote. "The officers had no knowledge of any of Ms. Gotbaum's personal issues."

Manning claimed that a witness saw a "docile" Gotbaum being carried by the police: "The woman said Gotbaum 'was noncombative, not resisting. She wondered if she was dead,' the lawyer said." But the police say that accounts of a "noncombative" Gotbaum are untrue and, according to the NY Times, that a video will reveal all - though it's unclear when the video will be released.

Gotbaum's body is being released to her family, but Manning is also upset at the medical examiner for not releasing "key organs" - her heart, brain and neck muscles. The Maricopa County Medical Examiner says keeping the brain for further testing is not unusual, though keeping the heart and neck is more uncommon (the ME's office initial findings said the cause of death was asphyxiation). Manning, who has worked on other cases where inmates have died while in custody, said the medical examiner's office "destroyed evidence, lost evidence, changed evidence and created evidence (in those cases). We were not going to take the chance that something like that would happen again. There is a very tight relationship between law-enforcement and medical-examiner offices everywhere in the country, including Phoenix."

Gotbaum's family has publicly suggested that she was manhandled by the police (she weighed 105 pounds) and a private investigator who observed the autopsy on behalf of the family said her body had many bruises. They hired another pathologist, Dr. Cyril Wecht, who also performed an autopsy. His report is expected in the next few weeks.

The NY Times also reported that Gotbaum was originally planning on taking a direct flight to Tucson, but decided on a later flight that connected in Phoenix because "she wanted to say goodbye to her three children, two of whom were attending a new grammar school."