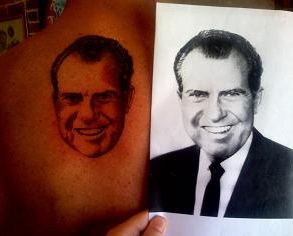 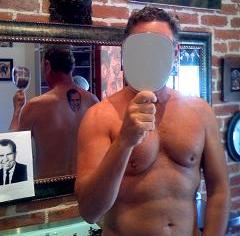 Just when we thought Roger Stone, the GOP operative accused of leaving a menacing voicemail for Governor Spitzer's father, couldn't be more amusing, he outdoes himself. Stone's assistant sent The Politicker's Azi Paybarah some photographs of Stone, supposedly "taken at The Ink Monkey tattoo shop in Venice Beach, California" where he was "getting a tattoo on his back of Richard Nixon’s face." Really.

Why bring up a bizarre tattoo and photographs? Because Stone says he was being inked with Nixon's mug on the very day he is accused of leaving the vitriolic message from his NYC apartment's phone number. Update: Actually, Stone says that he got the tattoo the day he was being told by reporters he allegedly made the call. Sorry for the confusion - we were mesmerized by the tattoo.

Stone has denied making the call and told NY1 the voice on the message "is definitely not me" and said that caller ID-spoofing is very possible. Stone believes the real caller was Randy Credico, a comedian who has impersonated Stone before.

The Politicker writes, "Stone will be happy to provide evidence, upon request, that he's really the guy in that weird picture on the left [of this picture] and that the tattoo is real." Dude, we want Roger Stone to be party entertainment!