Last we checked, despite the blizzard traffic was still slowly moving on the Holland tunnel. But you certainly wouldn't know it if you asked Google Maps. In fact, if you try to get directions to Jersey from the popular mapping service it appears is as if the tunnel has been filled in with water. 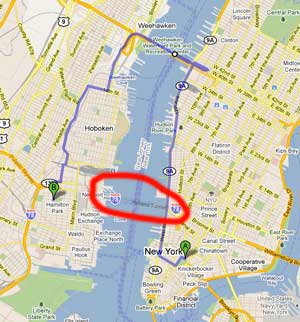 Something is funny about these directions...

But don't take our word for it, try it for yourself. We asked Google for directions from the Tweed Courthouse to Hamilton Park in Jersey City and this was the result. You can't even drag the route onto the tunnel like you can normally change routes (the tunnel appears as an outline rather than an orange like like the Lincoln and Battery tunnels).

It appears that the tunnel was went under (online at least) at some point earlier in the month, if this Google Maps Help forum thread is any indication. We've e-mailed the Googleplex for comment but haven't heard back yet. We wonder what the problem was—it isn't even that close to their recently purchased digs. Maybe Google knows something we don't? [via Gothamist Contribute]

#google
#google maps
#holland tunnel
Do you know the scoop? Comment below or Send us a Tip