Google employees worldwide walked out of work on Thursday, protesting the tech giant's handling of sexual harassment and what they say is a failure to police gender- and race-based discrimination. Walkouts began at 11:10 a.m. in Tokyo, and continue at the same local time in other offices around the globe.

In Manhattan, Google employees walked out of the Meatpacking District headquarters minutes ago.

According to the Guardian, employees' outrage at the company's tepid response to sexual misconduct in its upper ranks catalyzed the walkout. In an open letter published on the Cut, the walkout's seven core organizers explained their reasoning.

"All employees and contract workers across the company deserve to be safe," they wrote. "Sadly, the executive team has demonstrated through their lack of meaningful action that our safety is not a priority. We've waited for leadership to fix these problems, but have come to this conclusion: no one is going to do it for us. So we are here, standing together, protecting and supporting each other. We demand an end to the sexual harassment, discrimination, and the systemic racism that fuel this destructive culture." 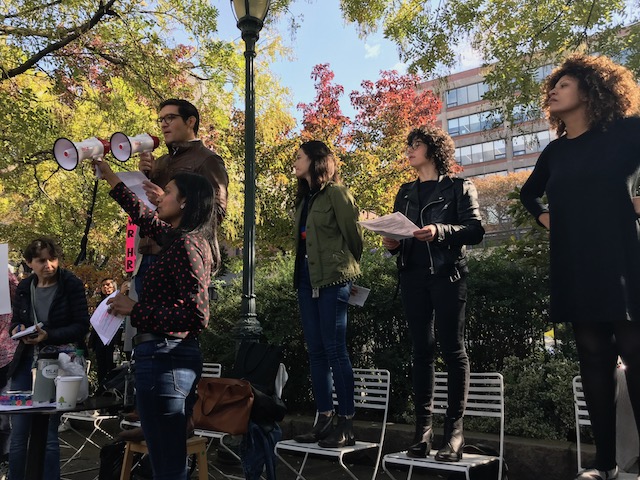 Many workers left flyers at their desks explaining their absence: "I'm not at my desk because I'm walking out in solidarity with other Googlers and contractors to protest [against] sexual harassment, misconduct, lack of transparency, and a workplace culture that's not working for everyone."

The action, called the "Walkout for Real Change," comes in response to a NY Times report detailing the ways in which the company sheltered Andy Rubin, the creator of Android, after a woman who worked for him at Google alleged that Rubin subjected her to coercive sex, making her perform oral sex on him in 2013. Google investigated and ultimately came down on the woman's side, but according to the Times, still treated Rubin with kid gloves. The company sent him on his way with a lucrative $90 million payout. The report states that the company also awarded two other offending executives staggering settlements, even though it was not contractually bound to do so, and kept on a third without many repercussions.

Google's lack of transparency about the incidents has outraged employees. In addition to the walkout, employees have made five demands, enumerated below:

We, Google employees and contractors, will walkout on November 1 at 11:10am to demand these five real changes. #googlewalkout pic.twitter.com/amgTxK3IYw

Speaking to the Times, Google's chief executive, Sundar Pichai, emphasized that all workers "would have the support they need if they wish to participate."

"Employees have raised constructive ideas for how we can improve our policies and our processes," he continued. "We are taking in all their feedback so we can turn these ideas into action." 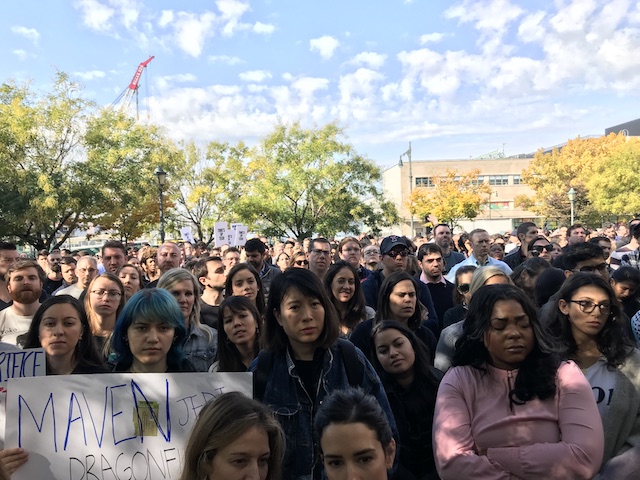 At New York City's demonstration, hundreds of Googlers and protesters convened for a rally in 14th Street Park, at 15th Street and 10th Avenue. "We will bring the consequences," one employee said in a speech to demonstrators. By noon, the crowd had begun to disperse, but men and women seemed to show up in equal numbers. Many workers took the day off, and some expressed concerns about their employer's commitment to reforming the corporate environment.

"I walked out in solidarity with my female coworkers, particularly those that have experienced the worst elements of tech bro culture," one Google employee, who participated in the walkout and asked to remain anonymous out of fear of retribution from his employer, told Gothamist. "I share the outrage over inequality, especially at the level of gender discrepancies. If anything is going to change I think we need to tie these questions to an organizational body that's independent of management, who seem to have glommed onto this protest as a PR opportunity. I'm talking about a union."

#google
#protest
#sexual abuse
#sexual harassment
#sexual misconduct
#walkout
Do you know the scoop? Comment below or Send us a Tip