Yesterday the Board of Correction voted unanimously in favor of a rule which put an end to punitive segregation—also known as solitary confinement, or "bing time"—for inmates under 21, and authorized the creation of a new isolation unit: the Enhanced Supervision Housing unit (ESHU) at Rikers Island.

At a cost of $14.8 million, the ESHU is supposed to decrease violence at Rikers by allowing the Correction Department to segregate up to 250 people who are identified as gang leaders or members, have committed stabbings or slashings, possess scalpels, have engaged in serious and persistent violence, participated in riots, protests or other disturbances, or are seen as threats to security. In the ESHU, people will be locked in their cells 17 hours each day with restrictions on visiting, using the law library and other activities.

Although he had testified in favor of the ESHU in December, Norman Seabrook, president of the Correctional Officers Benevolent Association, was clearly unhappy with the accompanying new restrictions and, during the public comments period, lashed out at the board.

"I don't see it as punitive segregation," he said. "I see it as a way to prevent assaults that happen over and over again."

Under the new time limitations, Seabrook said, if a person breaks another person's jaw, he would be sent to segregation for thirty days, released, and, knowing that he faced only another 30 days, could break that jaw again. He also condemned the ability of the Department of Health and Mental Hygiene to exclude people from segregation.

"The Department of Health has no right to tell the DOC and [DOC Commissioner] Joe Ponte not to put violent inmates in segregation just like the DOC doesn't tell the DOH not to give people the flu shot," he stated. The time limitation, he said, jeopardizes the safety and security of everyone on the island. "Every single time a corrections officer is assaulted because of what you did, we're going to sue you too," he told the board before turning and walking out of the auditorium.

People with serious mental health or physical disabilities will not be placed in the ESHU. Neither will 16 and 17-year-olds. People ages 18 to 21 are also excluded unless they have committed a Grade One infraction, which includes acts such as assault, rape, and participation in protests, as well as possessing tobacco-related products and possessing money exceeding twenty dollars.

The Board of Correction, the agency which creates and monitors minimum standards in New York City jails, also added restrictions to segregation, limiting the number of consecutive days in segregation to thirty, followed by a seven day period outside the unit.

In addition, no person, regardless of their age, can be held in punitive segregation longer than 60 days within a six-month period unless he is deemed “persistently violent.” Then, the Chief of Department must approve an extension above 60 days and daily mental health rounds must be made. Grade 3 infractions (like possessing art supplies, littering, spitting and blocking the cell window) can no longer lead to punitive segregation. 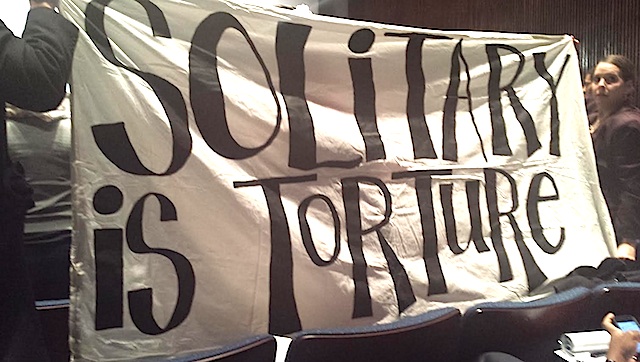 “The only way we’re going to decrease violence is to realize that violence is caused by [conditions on] Rikers. That's what the Department of Health says,” he stated. “When you’re putting people in cages...violence persists.”

Given that the new reforms to punitive segregation were presented in the same rule as the authorization of the ESHU, Board members could only vote for both or neither. As the vote was cast, members of the Jails Action Coalition stood up displaying a banner proclaiming “Solitary is Torture.” Others stood with signs reading “ESHU=solitary” and “End Torture Now.” The vote passed unanimously with a provision that, in 18 months, the Board will evaluate the ESHU's effectiveness and decide whether to authorize its continuation.

Jennifer Parish, director of criminal justice advocacy at the Urban Justice Center and Jails Action Coalition member, told Gothamist, "I'm very disappointed with the way in which the Board tied enactment rules limiting the use of solitary confinement to the creation of new restrictive housing units. The better practice would have been to initiate rulemaking on solitary first, allow members to vote on those rules, and then allow the ESHU proposal to proceed with members voting on it separately." However, she adds, "The reforms are significant. People are spending months, if not years, in solitary. That practice will end."

Johnny Perez spent 60 days in segregation at Rikers as a teenager and is now a member of the Jails Action Coalition. Limiting segregation time to 30 days "is progress," he said. But he also cautions, "We have to be careful not to call solitary confinement by another name, like administrative segregation or Enhanced Supervision Housing, not to repackage it to pacify the public."

Victoria Law is a freelance writer and editor. She frequently writes about incarceration, gender and resistance and is the author of Resistance Behind Bars: The Struggles of Incarcerated Women.

#bing time
#Rikers Island
#solitary confinement
#longform
#original
Do you know the scoop? Comment below or Send us a Tip