[UPDATE, 2016:The L train may shut down. It's time to activate THE GONDOLA]

Picture this: it's 100 degrees out, you descend into the subway station to find a packed platform, you stand for 10 minutes waiting for a train as the sweat forms a glistening husk around your entire body. What if you could skip all of that, and float way above the river to your destination? CityRealty's president Dan Levy has proposed an East River Skyway, and we are on board. This high-speed gondola would connect a number of areas along Manhattan and the Brooklyn and Queens waterfronts—kind of similar to the East River Ferry route.

If the real estate exec's proposal ever takes flight, the first phase would connect the Williamsburg waterfront to Downtown Manhattan (a trip to Delancey Street would only take 3.5 minutes!), South Williamsburg and the Brooklyn Navy Yard. After that, an extension north to Greenpoint, LIC, and Midtown East, and south to DUMBO and the South Street Seaport area would be added. After that, who knows! Hoboken? The moon?

Levy says his straightforward plan is "cost-effective, and sustainable compared with alternatives." It also would service over 5,000 people per hour in both directions. PLUS, it's got a sweet view. Below, some figures from the proposal: 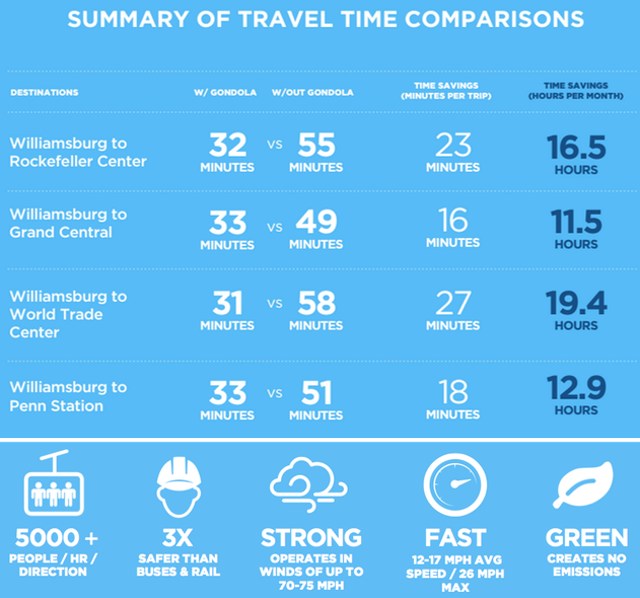 The idea—which would cost around $100 million to make a reality—was inspired "by the efficiency of high-speed gondola designs and their widespread use in London, Rio de Janeiro, Germany, and Singapore." And Roosevelt Island?

#dan levy
#east river skyway
#gondola
#transportation
#original
Do you know the scoop? Comment below or Send us a Tip