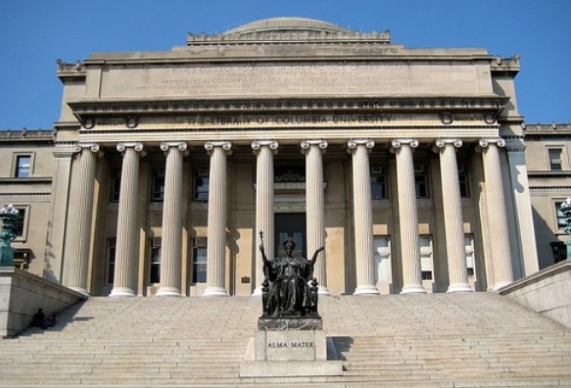 It's a mixed bag for Columbia today. The school was probably happy to find out that it ranked 9th in U.S News & World Report's latest top college ranking issues, but it's no fun to learn that its billion-dollar Manhattanville project was rejected by a community board committee.

IvyGate got a hold of the embargoed "Annual Ranking of Best National Universities" information and found that Columbia ranks ahead of Dartmouth (#11), Cornell (12), and Brown (14) but behind Princeton (1), Harvard (2), Yale (3) and U. Penn (5). Columbia shares the number 9 ranking with University of Chicago, and IvyGate has the complete lists for the top universities as well as top liberal arts colleges.

As for Manhattanville, Community Board 9's land use committee voted to reject Columbia's plans "unless certain requirements were met", according to the Columbia Daily Spectator. Those requirements include Columbia taking "eminent domain off the table and withdraw the proposal for a 7-story bellow grade structure, to provisions for affordable housing, and promises that what is built will be done so as to minimize pollution and maximize sustainability." The Atlantic Yards Report's Norman Oder attended a portion of the meeting and made some comparisons between Manhattanville and the Atlantic Yards, including how Columbia president Lee Bollinger had to attend, whereas AY developer Bruce Ratner rarely makes public appearances; AY unfairly packed meetings with supporters; and how Columbia doesn't have the Empire State Development Corporation's "fast-track process."

The meeting lasted 5 hours, and Manhattanville project supporter David Dinkins was even heckled ("You’re a traitor!"). And a Columbia official believes that the vote simply means there is room to negotiate with the community. The full community board meeting is on Monday, and while community boards do not have any real governmental standing, their support can aid developers with getting approvals from city agencies and officials. You can learn more about Columbia's Manhattanville plan here, and here's one site opposing the plan, StopColumbia.org.

Photograph of Columbia's Low Library by wallyg on Flickr