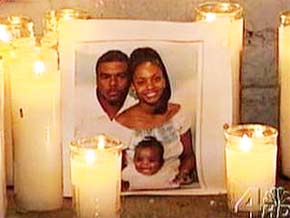 Beginning at 10:30PM last night and through 5AM this morning, family, friend and other supporters gathered in Queens to remember Sean Bell, the 25-year-old man who was shot by undercover police the night before his wedding a year ago. Bell's fiancee, Nicole Paultre-Bell, told the crowd, "I want justice, but no matter what happens, it won't bring Sean back."

The Reverend Al Sharpton, who also attended the overnight vigil, said, "This time a year ago, Nicole was preparing for a wedding, preparing for what should have been a proud day. It ended up being the saddest day of her life." Bell and Paultre-Bell had two daughters together; they are now 4 years old and 1 year old.

Bell, who had been celebrating at a bachelor party at the Kalua strip club, and his friends were unarmed and shot at 50 times by police officers. The police, who were staking out the club which had reports of criminal activity and prostitution, thought that Bell and his friends were armed. The Post went to the Kalua club recently and found women offering themselves for money: "When asked how much she charged, the woman - dressed in knee-high boots, jeans and a denim hoodie - said $50 for oral sex and $100 for a roll in the hay."

Three of the five police officers were indicted by a grand jury. Two of the officers, Michael Oliver and Gescard Isnora, are pleading not guilty to manslaughter while police officer Marc Cooper has pleaded not guilty to reckless endangerment. Oliver fired the bullets, shooting 31 times, and the entire incident brought up the issue of "contagious shooting" and prompted a review of NYPD gun use.