On Friday, a man was seriously injured after being punched in the face for going on a racist tirade about "n***ers" in the West Village. Douglas Reddish, 25, was eating with his girlfriend at Benny’s Burritos on Greenwich Avenue near W. 12th Street around 5:50 p.m. when he was confronted by 31-year-old Austin Dewan. Police sources told the News that Reddish, who is black, initially tried to help the visibly drunk Dewan, who is white, to steady him from “falling onto the other tables,” but Dewan allegedly yelled, “This n***er wants to fight me.” While the Post reported that Dewan was upset about losing his job at Goldman Sachs, a rep for the firm says they have no record of his employment. 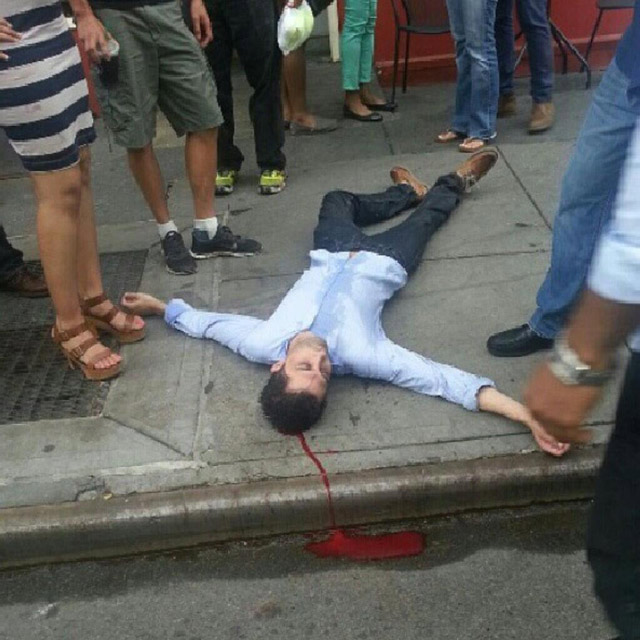 Before coming to Benny's Burritos, Dewan spent $40 on beers at the Village Den on West 12th Street, according to a manager. According to the Post, he then crossed the street to Equinox Gym, where a TV commercial was being filmed, and tried to sit on women’s laps. After that, he ended up talking to a woman at Johnny's Bar on Greenwich Street; she claims he told her he was upset over his wife leaving him and about his “job at Goldman Sachs."

Goldman Sachs spokesperson Andrea Raphael said that Dewan never worked for them though: "While it was reported that the man who was punched in the incident in the West Village last night was possibly an employee of Goldman Sachs, we have no record of him ever being employed at Goldman Sachs."

"This really belligerent white guy came walking up to them and started yelling out the n-word," Benny’s worker Robert Garcia told the Post. "There was some sort of altercation and it made the black guy punch the white guy in the face. He was out cold. I thought he was dead." Dewan hit his head on the sidewalk, and was taken to Bellevue Hospital in critical condition. He's now been upgraded to stable condition and is being treated for head trauma.

Reddish, who left the scene after the punching incident, was arrested a few blocks away and arraigned yesterday on a misdemeanor assault charge.