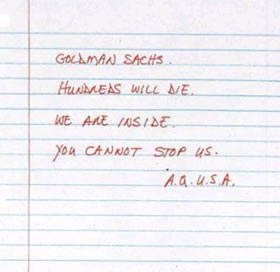 Late last month, a number of handwritten letters were mailed to newspapers across the country, with a threat directed at Goldman Sachs, saying that "hundreds will die" with the sign-off "A.Q.U.S.A." Officials say they do not consider the threats to be credible, though they are investigating the matter to figure out who sent the messages.

The letters were postmarked from Manhattan and Queens and were sent to papers in NJ, Texas, Indiana and Washington. However, local and community papers like NJ's Star-Ledger and Queens' Times Ledger papers received the threats - none of the top 10 papers in the country received them. The newspapers started to turn them over to authorities as soon as they were received. A source says some of the reasons the threat is not of "high credibility" because the notes are short and "non-specific."

The FBI is looking at fingerprint and DNA evidence on the letters and envelopes, as well as the postal bar codes. The AP reports that "It is a federal crime to send threats through the U.S. mail, punishable by up to 10 years in prison if convicted." And Goldman Sachs, the world's largest securities firm, said they are working with the feds and "We take any threat to the safety of our people very seriously."