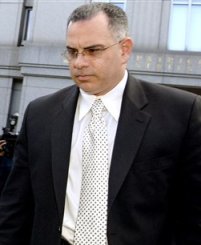 The feds must believe if you try, try, try and fail, fail, fail, you must try again, because it seems they are going to charge John Gotti Jr. with a new set of murder charges. The Post reports "Junior will likely be charged with at least five murders," including a Queens man who Gotti Jr. "allegedly disemboweled" in 1983, using a boxcutter or linoleum knife. And that's not all: Junior allegedly got help from "more than a dozen" dirty cops.

A number of cops were allegedly on the take to protect the Gambino's drug dealing operations in various Queens bars during the 1980s and 1990s, and some even "assisted in or covered up" murders committed by the mob. The Post's source gives a standard for a moral code saying, "None of [the cops] pulled the trigger, but they clearly violated the public trust. Mobsters are supposed to behave like that. Cops aren't."

The prosecutors would need to figure out how to get around the five-year federal statute of limitations before charging Gotti Jr. Last year, after a third mistrial in the government's case against the supposed acting boss of the Gambino crime family, the prosecutor said that going after Junior a fourth time "was above [his] pay grade." These days, Gotti Jr. is claiming he's poor. You can read more about him at Gang Land News.

#bars
#crime
#dirtycop
#gambino
#Gang Land News
#Gotti Jr.
#government
#john gotti
#john gotti jr
#johngottijr
#Jr.
#mafia
#mistrial
#mop
#murder
#news
#queens
#the post
Do you know the scoop? Comment below or Send us a Tip
A new Gothamist is coming! We’ve moved comments over to our beta site. Click here to join the conversation and get a preview of our new website.