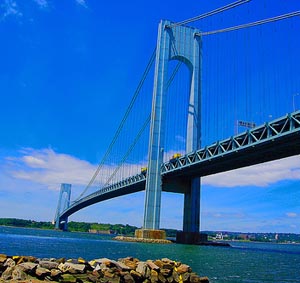 Despite formidable barricades, sensors, alarms and surveillance cameras, 13 “ravenous ruminants” recently succeeded in infiltrating a restricted area near the base of the Verrazano Bridge without triggering alarms, the Daily News reports. During the summer, the goats are kept at Staten Island's Fort Wadsworth because they excel at eating weeds and other vegetation that gets into cracks of the historic structures there.

Seems they also excel at infiltrating high security areas. After climbing under a mesh hurricane fence they were eventually spotted by a Bridge and Tunnel officer in a guard booth – luckily before they could penetrate a second fence and start gnawing on the bridge’s base. A source tells the News, "The goats were taken into custody and turned over to the Army once it was determined not to be illegal aliens or agents of terror."

In a statement, the Bridge and Tunnel Authority said, "Our employees did a great job corralling the goats." And this isn't the first time goats have made headlines; you'll recall that back in May a little amputee goat named Albie won our hearts when he was discovered in Prospect Park after (possibly) escaping from a slaughterhouse.