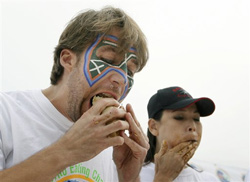 We hope the following doesn't put anyone off their appetite before they've even had a chance to tuck into their Thanksgiving feast, but we have to describe what champion eater Tim Janus managed to consume in a publicity feast for charity. In the course of 15 minutes, Janus gobbled down the following:

This was accomplished in a New York deli yesterday in order to raise awareness of the city's truly hungry and the dire situation facing the nation's food banks, which are receiving less in federal funding and charitable giving. Janus, who competes under the name EaterX, is a member of a competitive eating league that donated $6,000 in connection to the Thanksgiving feast event. Two matching grants were also donated for a total of $18,000 raised to benefit the Food Bank for New York City. Janus followed his meal by eating an entire pumpkin pie for dessert.

According to 1010 WINS news, Food Bank spokeswoman Carol Schneider said the event raised enough money to feed 90,000 meals to the city's hungry. Unfortunately, the confluence of higher rents, living expenses, and fuel bills in New York are leaving many people vulnerable to hunger in the city. "According to the Food Bank for New York City Web site, 1.3 million New Yorkers currently turn to food pantries and soup kitchens to keep from going hungry, a 24 percent rise from 2004." And Governor Spitzer got into the act, announcing an extra $5 million in funding for the state's food banks.

As Thanksgiving is supposed to be a holiday to celebrate times of plenty for Americans, please take a moment to consider donating to your local food bank that helps those who are less fortunate. The Food Bank for New York City has a site page on how to help, via donated money, food or volunteer effort. A national directory of food banks in city's across the U.S. can be found here.