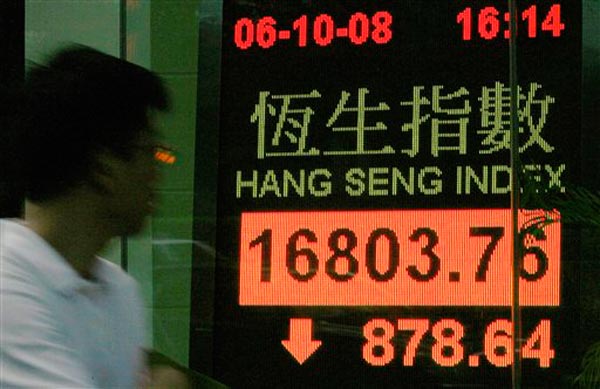 What bailout bill that was signed into law over the weekend? Stock markets around the world fell: Japan was down 4%, China 5%, the FTSE 5%. Iceland and Russia suspended trading after falling 14%. The futures index in NY is down, and it's believed the Dow will open down 200 points.

UBS economist Larry Hatheway told the Wall Street Journal, "We now believe national recessions in the U.S. and the U.K. will be deeper and longer than previously forecast. For the first time, we also anticipate recession in the euro zone."

The Federal Reserve released a statement saying, "The Federal Reserve stands ready to take additional measures as necessary to foster liquid money-market conditions." In other words, Bloomberg reports it may "double its auctions of cash to banks to as much as $900 billion."

#bailout
#business
#economy
#global economy
#global markets
#recession
#wall street
Do you know the scoop? Comment below or Send us a Tip
A new Gothamist is coming! We’ve moved comments over to our beta site. Click here to join the conversation and get a preview of our new website.