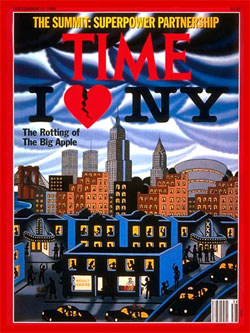 Just as he's been plying his charm during a campaign swing in South Carolina, the NY Times has a big story about how former mayor Rudy Giuliani works his New York City credentials without being too encumbered by associations with such a liberal-leaning town (even his own liberal leanings!).

Giuliani takes the time during his speeches to make old NYC look bad so he winds up looking good. For instance, there used to be a tourism tip sheet for New Englanders coming to NYC back in the 1990s, and Giuliani says, "You know what the last tip was? ‘Don’t make eye contact.’ Can you imagine going to a city and being told you shouldn’t look at anyone?”

And Giuliani repeatedly references the Time cover story, "The Rotting Big Apple," from September 17, 1990 (as he did during the UNH debate). But guess who saved NYC? That's right. The candidate who now says, "Gosh, there are more Republicans on this side of the room than there are in all of New York City. So I am really comfortable here.” What's he's not mentioning are race relations during his mayoral terms and disgraced BFF's.

You can read the 1990 Time article here: It was a year when a Bronx prosecutor was killed while getting lunch, a politician was killed in his campaign headquarters, a tourist was murdered on the way to dinner and four children were killed by stray gunshots over an eight-day period. The most expensive tickets for a Broadway show were $60, middle-class residents were being driven out of the city, and then Mayor Dinkins' leadership was questioned. And no matter how much conditions have changed in New York since 1990, avoiding eye contact with strangers on the street or the subway isn't always a bad thing.