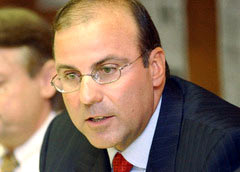 John D'Amato, a prominent Staten Island attorney, died of a heart attack yesterday; the 52-year-old had been jogging near his Dongan Hills home. D'Amato, a lawyer and lobbyist, had been appointed as the NYC campaign manager for Rudy Giuliani's presidential campaign. (He had hosted a fund-raiser for Governor Spitzer's campaign last year, though.) The Staten Island Advance writes:

John D'Amato was a titan on Staten Island -- one of the most ambitious, aggressive and influential of the borough's native sons...He spearheaded the ongoing lawsuit against the alleged Saudi Arabian financiers of the Sept. 11 terrorist attacks and achieved a landmark $75 million national settlement from the maker of the painkiller OxyContin-- the Island's largest-ever civil case. And though neither fight was successful, he was a key player in the city's bid to host the 2012 Olympics and in the borough's controversial lobby for a proposed NASCAR track on the West Shore.

According to his biography on his law firm's website, D'Amato "attended undergraduate at Ohio State University where he was awarded an athletic scholarship and was a member of the 1975 Rose Bowl Football Team." And he had been inducted into Staten Island's Sports Hall of Fame.

D'Amato was in the news recently, though not for Giuliani campaign-related matters. A retaining wall behind his house collapsed, causing a 50 foot by 50 foot chunk to fall towards other homes. Staten Island Borough President James Molinaro called it an "act of God" (a nor'easter may have weakened the wall) but the Department of Buildings was investigating whether the wall was built without permits.