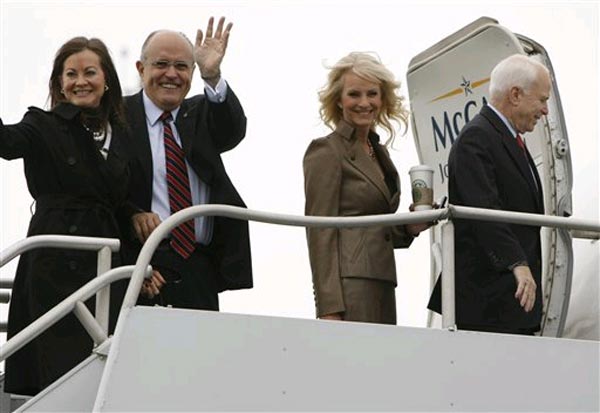 Much like John McCain, Rudy Giuliani, who accompanied the presidential candidate on a campaign plane earlier today, is very interested in what happens with the government's bailout plan. That's because his law firm, Bracewell & Giuliani, is letting potential clients know it can best steer them--with its new Task Force-- to deal with the bailout. From the press release:

The Task Force will focus in particular on legislation, regulatory actions, enforcement matters and strategic communications to assist market participants in their efforts to navigate one of the most significant governmental actions in the history of the U.S. economy.

Commenting on the formation of the Bracewell Task Force, senior partner Rudy Giuliani said, "Our team of former government officials and experienced attorneys in the fields of legislation, enforcement and finance are equipped to guide institutions in this quickly evolving and complex environment." Mr. Giuliani noted that the Bracewell Task Force includes a former Comptroller of the Currency, a former Assistant Secretary of Legislative Affairs of the U.S. Department of the Treasury, former members of Congress from both political parties, former federal prosecutors, and former SEC enforcement attorneys.

And, OMG, there will be a blog: "the Task Force is establishing a blog to relay critical real-time information on the development of policy related to the legislation, regulation and enforcement priorities, and will also be providing periodic updates directly to interested clients."

The Democrats criticized the firm's "crass opportunism," telling the Daily News saying it "raises serious questions about whether John McCain is comfortable with one of his most visible campaign surrogates trying to cash in on what Alan Greenspan called a once-in-a-century economic crisis." While the McCain campaign declined to comment, the Republican National Committee said the Dems were being hypocritical, "noting that Team Obama sent out a fund-raising letter last week that attempted to exploit the current financial mess."