Giuliani's Campaign is Either On Fire or Burning Down 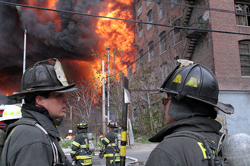 The head of a firemens' union is pledging to end any hope of Giuliani's campaign for President. Rudolph Giuliani has emphasized his leadership in crisis as the centerpiece of his campaign for the Presidency. His primary set piece in this narrative are FDNY firefighters, who accumulated an enormous reservoir of goodwill during and after the 9/11 attacks, during which 343 firemen and parademics were killed. Perhaps it's a good strategy heading into a Republican nomination race, which usually favors people who are considered strong on national defense, but Giuliani's tack so far appears to have left him sitting on a one-legged stool. If he loses 9/11 as an issue to rely on, he's pretty much finished.

The New York Post reports that yesterday, the head of the United Firefighter's Association, Steven Cassidy, said that if Giuliani's campaign ever looked like it was succeeding, he would do everything in his power to sink it. "[We] will never be with Rudy Giuliani," he proclaimed. "We will make it known that he is not qualified to lead." He accused the former Mayor of failing the city and its firefighters, and just "wandering around the city," without making sure police and firefighters could communicate. Not all firefighters are lockstep on the issue of Giuliani's candidacy. Many firefighter groups around the country support him, as well as a number of FDNY members.

Candidate Sen. John McCain met with Cassidy, and the union head has also met with Sen. Hillary Clinton. In 2004, Cassidy barnstormed through swing-state Ohio in support of George W. Bush, which could have been a crucial element in the President's electoral victory. The Post describes some emnity between the UFA and Giuliani, due to a post-attack decision to limit firefighters' role in remains recovery at Ground Zero, which led to a small but literal brawl between members of the FDNY and the NYPD. Six year later, the snub at an emotional time still burns.

Giuliani recently declined to participate in a "Daily News "Candidate Challenge" Q&A feature, that asked questions of a number of Democratic hopefuls and John McCain. What do you think?