Giuliani Won't Rule Out Running for Gov (or Prez!) 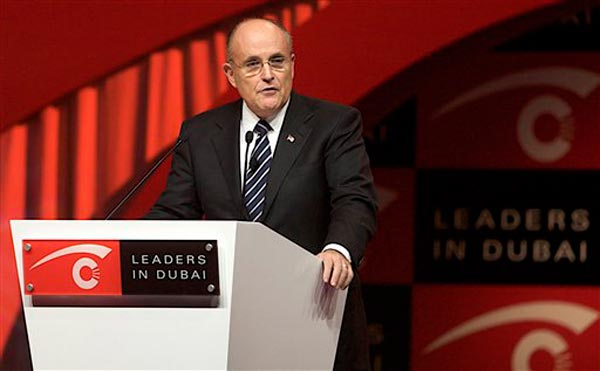 Rudy Giuliani spoke at a conference in Dubai over the weekend (perhaps commanding his $100,000+perks speaking fee) and perhaps kicked off his campaign for something.

What that is, no one knows, but when asked about 2012, he said "No one knows whether you'll do something again until you come to the point of: 'Is it possible to do it again? Would you have a chance of winning?' I mean those are just things you can't evaluate right now." And when someone brought up running for governor, the former mayor of NYC said, "I don't know if I'd be interested in it, but I'll think about it when the right time comes along."

He also referred to how the GOP lost its bid for the presidency in the context of the economy, "If you had told me a year ago we would have a major economic crisis, I would've told you it would be very hard for any Republican ... to win." In other words: The 9/11 card is getting old! As for whether he'd take a job in the Obama administraiton "You never answer questions like that hypothetically. Very few people ever turn the president down, but that's an unrealistic situation." How great would it be to see Giuliani with Joe Biden, who famously quipped that Giuliani only says, "three things in a sentence: A noun, a verb and 9/11."