Giuliani Tries to Heat Up Campaign in New Hampshire 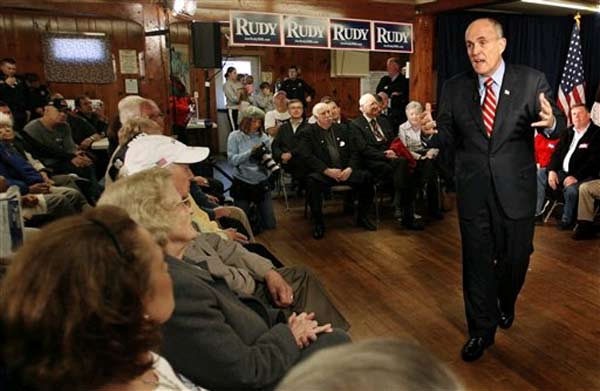 Last week, a CNN/WMUR poll with "likely Republican voters in New Hampshire" gave a snapshot of what they were thinking and Rudy Giuliani's presidential campaign got the bad news that not only had his poll numbers slid from 24% to 16%, he was now in third place after former Massachusetts governor Mitt Romney (33%, up from 25%) and Arizona Senator John McCain (18%). Third after McCain! So, Giuliani hustled to New Hampshire to make inroads this weekend.

Giuliani spent his time "sharpening his attacks" on Romney. For one, he pointed out how he reduced crime while he pointed out that Romney appointed a judge who released a convicted killed. And Romney criticized the judge, Giuliani took a broad view of the situation, "[Romney] had an increase in murder and violent crime while he was governor... So it's not so much the isolated situation which he and the judge will have to explain - he's kind of thrown her under the bus. So it's hard to know how this is all going to come out. But the reality is, he did not have a record of reducing violent crime."

Romney was also on the campaign trail yesterday, and while he called Giuliani a "good friend," he noted how Giuliani left behind a $3 billion budget gap for Mayor Bloomberg. And when Giuliani's campaign found out, Giuliani told voters, "I have the best record of fiscal discipline. I am beating my closest rival in my own party in cutting taxes, 23 to nothing.". All in all, it was a tit-for-tat day.

The one consolation Giuliani can take from the CNN/WMUR poll is that many of the January 8, 2008 NH primary voters are undecided/independent voters. Another possible bright spot for him? The 30 "die-hard Giuliani supporters" from New York who are traveling to NH every weekend until the primary to speak to NH voters about their man.