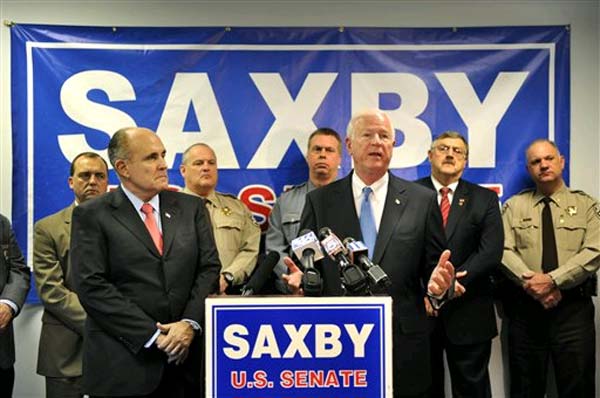 Photograph of Giuliani and Chambliss by Rich Addicks/AP

Former mayor and presidential candidate Rudy Giuliani was in Georgia today, to campaign for Senator Saxby Chambliss. Chambliss will face off against Democratic challenger Jim Martin in a December 2 run-off.

According to the Atlanta Journal Constitution, Giuliani emphasized that Chambliss's Senate seat was critical, "We’ve got to make sure we don’t give (U.S. Sens.) Harry Reid (D-Nevada) and Nancy Pelosi (D-Calif.) and the Democrats in Washington, D.C., a blank check. If we give them a blank check, they will sign that check and be taking money out of our pockets.”

Chambliss won his Senate seat in 2002, and Democrats are reminding voters of the ad Chambliss aired; the ad implied then-incumbent Senator Max Cleland--a Vietnam War triple-amputee--was unpatriotic by showing Cleland and then images of Osama bin Laden and Saddam Hussein. Back then, Senator John McCain called the ad a "reprehensible" and "worse than a disgrace." Speaking of McCain, his old running mate Alaska Governor Sarah Palin is heading to Georgia to campaign with Chambliss on Monday.