Giuliani At RNC: Trump Will Do To America What I Did To NYC

The first night of the Republican National Convention began with D-List celebrities extolling the virtues of C-List celebrity Donald J. Trump and nearly ended with a very public bit of plagiarism by his wife, Melania Trump. That’s nearly, because in a display typical of the logistical missteps that have plagued Republican organizers so far, several speakers came to the stage after Ms. Trump and spoke to a nearly empty auditorium, as delegates and media fled the arena in downtown Cleveland to catch waiting shuttles.

In keeping with the tone and rancor of their presumptive nominee, speakers repeatedly lashed out against immigrants, Black Lives Matter protesters, and Muslims, ostensibly to stick to the night’s theme of “Make America Safe Again.” Gone were the standard Republican straw men of welfare recipients and out-of-touch coastal elites, replaced instead with a large swath of the American public, who Trump has not only decided to alienate, but to disenfranchise and deport. 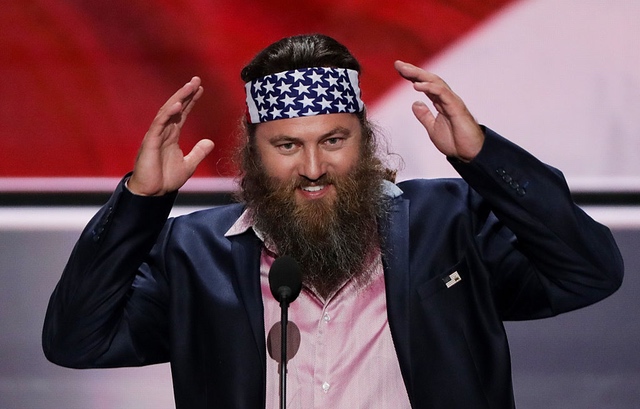 “Who said nothing good comes of reality TV?” asked Willie Robertson, the Duck Dynasty star who opened the night, explaining that he related to Trump, not only because of their reality show roots, but that the progeny of a New York City real estate developer was, like him, a simple businessman with a good-looking wife.

Robertson was quickly followed by Happy Days star Scott Baio, a last-minute addition to the convention whose address barely lasted a minute, and who asked attendees to help “make America America again,” in what might have been only the third most incomprehensible thing uttered during the evening.

When it was first announced, the night was centered around only the 2012 attacks in Benghazi, and not larger American security issues on the whole. But two private security contractors, who were ambushed during the attack on the American embassy, took the stage to hold forth at length about the failings of then Secretary of State Hillary Clinton. Their ponderous and lurid description of the events lasted almost twenty minutes, culminating in a call to elect Trump, and not a leader who “ failed to protect her people on the ground.” Before the two spoke, Pat Smith, the mother of a state department employee who died during the attack, said she held Hillary Clinton “personally responsible” for the death of her son.

The speakers then shifted focus to more domestic matters, vilifying both immigrants and the black community as a whole. Family members of individuals killed by immigrants lashed out against the current president’s immigration policies (which have deported more people than any other president) playing to the nativist energies in the crowd. When Rep. Sean Duffy’s wife, Rachel Campos-Duffy, told the crowd that her parents were born in Mexico, she was booed. Milwaukee County sheriff David A. Clarke, a fervent critic of the Black Lives Matter movement, led the auditorium in chants of “Blue Lives Matter,” and claimed that both the Black Lives Matter movement, as well as Occupy Wall Street, “[violate] the code of conduct we rely on.”

But that was all prelude to a spirited, gesticular, and downright strange performance from former New York City mayor Rudy Giuliani, who embraced Trump as a uniter, and cast himself as a Civil Rights standard-bearer.

“We say thank you to every police officer and law-enforcement agent who’s out there tonight protecting us—black, white, Latino, of every race, every color, every creed, every sexual orientation,” Giuliani frothed. “When they come to save your life, they don't ask if you are black or white. They just come to save you!"

Giuliani regaled the crowd with stories of his time as mayor, where Trump would call him up to offer money and support to victims of crime and terror. Certainly eyeing the position of Attorney General in a possible Trump cabinet, Giuliani threw his hands wildly into the air and pounded his fists against empty space as he insisted that Trump was the agent of change that America sorely needs.

“What I did for New York, Donald Trump will do for America!"

Melania then gave a fifteen-minute speech which was initially well-received by both the adoring crowd, as well as the press, but whose luster quickly wore off as Twitter users connected large parts of her speech to one delivered at the 2008 Democratic National Convention by Michelle Obama, fulfilling the same role of a nascent First Lady. With a wink and a wave, Trump escorted his wife off the stage, effectively ending the night before several headlining speakers even had a chance to extol their own surely divergent opinions on immigrants and Muslims. But the arena had already emptied—once Trump had left the building, there was no reason to stay. 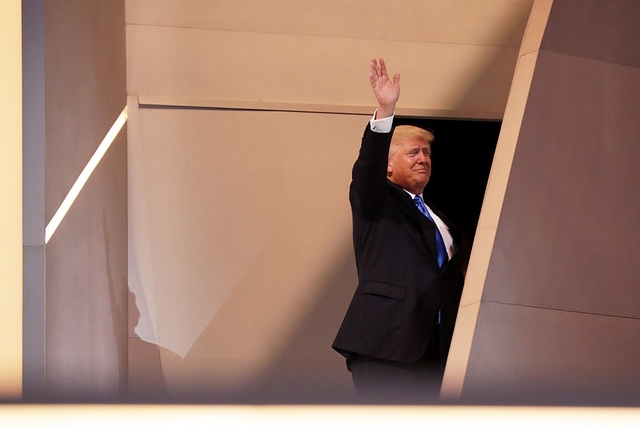 Exiting the convention center, one delegate was overheard saying to another, "That was fun. They kept it sexy."

#cleveland
#donald trump
#giuliani time
#rnc 2016
#trump
#original
Do you know the scoop? Comment below or Send us a Tip
A new Gothamist is coming! We’ve moved comments over to our beta site. Click here to join the conversation and get a preview of our new website.