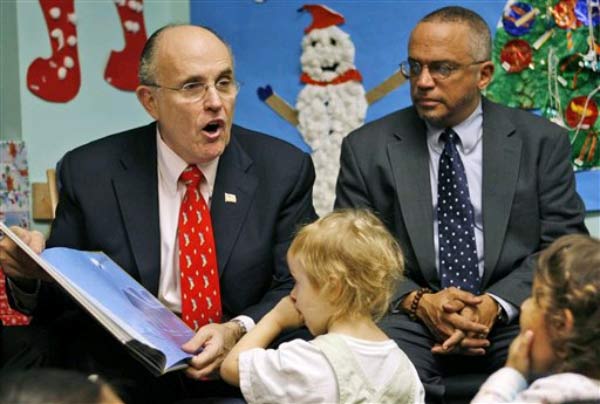 Presidential hopeful Rudy Giuliani spent his Christmas Eve reading Clement Clarke Moore's A Visit from St. Nicholas to children in Harlem and explaining to reporters that's he's cancer-free. Giuliani, whose flu-like symptoms (well, according to his press people) and bad headache have raised questions about the prostate cancer survivor's health, said, "I am perfectly healthy. I don't have cancer."

He added that his protein levels have been fine and that the tests he took were a precaution. "All those tests came out perfect. I'm very healthy, very strong. Because it's me - a presidential candidate or whatever - I got more tests than normal." Giuliani proclaimed himself as feeling "terrific."

Not so terrific is that shape of his campaign: The NY Times had a feature about the Giuliani campaign's problems, from strategic missteps, personal issues becoming the focus, and doubts from other Republicans. What's interesting is that there are issues between Giuliani's longtime advisers from his NYC mayoral days and the Republican consultants with more national experience. Fun facts: Some consultants call Giuliani "Ralph" when discussing strategy in public settings and many campaign staffers are caught up in the minutiae:

"One participant in the calls, who asked not to be identified because he was discussing internal campaign strategy, said the advisers often spent hours talking about subjects like the logistics of campaign events — where Mr. Giuliani would stand, what the backdrop would be — rather than a long-term message that goes beyond the Sept. 11 terrorist attacks or Mr. Giuliani’s record as mayor of New York. "

Those must be some meetings.

And this was the 14th year that Giuliani has read to children at the Mother Hale Learning Center in Harlem. The center provides educational programs to young children.

Photograph of Giuliani reading to two- to five-year-old at the Mother Hale Learning Center, with the center's executive director Randolph McLaughlin on the right, by Kathy Willens/AP