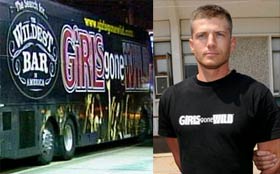 Girls Gone Wild is currently looking for the wildest bars, and the crew had been filming a wet T-shirt contest at Nubar tavern. Apparently O'Sullivan asked a 20-year-old woman at the bar (not in the contest) to join him on the bus. From the NY Post:

"She went inside with this guy just to see what was going on and, subsequently, she was assaulted," said Suffolk County Police Detective Lt. Robert Edwards, adding that other people were getting on and off the bus at the same time.

"It was short of a rape situation, but it was a sexual assault," Edwards said.

At O'Sullivan's arraignment yesterday, Suffolk County prosecutors said he and the victim started touching and kissing, which she had no problem with.

But things took a tawdry turn when he allegedly pulled down her shorts and underwear as he put his hands around her throat to keep her from running out.

The victim's friends came aboard the bus in time and saw her struggling with O'Sullivan. The victim flagged the police cruiser down while her friends called 911.

O'Sullivan pleaded not guilty and is being held on $100,000 bail or $200,000 bond. The bus was impounded. Another bar, The Crazy Donkey, where Girls Gone Wild had been taping on Monday, told Newsday they had no incidents.